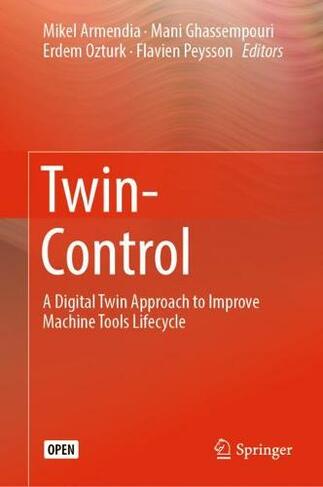 This open access book summarizes the results of the European research project "Twin-model based virtual manufacturing for machine tool-process simulation and control" (Twin-Control). The first part reviews the applications of ICTs in machine tools and manufacturing, from a scientific and industrial point of view, and introduces the Twin-Control approach, while Part 2 discusses the development of a digital twin of machine tools. The third part addresses the monitoring and data management infrastructure of machines and manufacturing processes and numerous applications of energy monitoring. Part 4 then highlights various features developed in the project by combining the developments covered in Parts 3 and 4 to control the manufacturing processes applying the so-called CPSs. Lastly, Part 5 presents a complete validation of Twin-Control features in two key industrial sectors: aerospace and automotive. The book offers a representative overview of the latest trends in the manufacturing industry, with a focus on machine tools. 220 Illustrations, color; 5 Illustrations, black and white; XVI, 296 p. 225 illus., 220 illus. in color.

Dr. Mikel Armendia completed his Master's in Mechanical Engineering in 2007. In 2011, he obtained a PhD in Mechanical Engineering on machining of titanium alloys. He has since worked in the Automation and Control Unit of IK4-TEKNIKER where he has been involved in projects dealing with mechanical system modelling, servo control adjustment, monitoring etc. Since 2015, Dr. Armendia has coordinated the EU-funded Twin-Control project. Dr. Eng. Mani Ghassempouri completed his studies in Tehran in 1992, obtaining a Master's degree in Robotics and Mechanical Engineering from the University of Technology of Tehran. In 1997, he received his PhD degree in Mechanical Engineering from the LMS University (Poitiers, France) and CETIM (Senlis, France). Until 2000 he remained at the CETIM as Simulation and Test Team Manager dealing with dynamic simulation of flexible mechanisms, including the numerical control system, prototyping and experimental validation and software design. From 2000 he has worked at COMAU Powertrain Systems as Research, Development and Innovation Department Manager. He manages all R&D and innovation activities for PWT and is a member of the COMAU Innovation Committee.Dr. Erdem Ozturk received his BSc degree in Mechanical Engineering from Middle East Technical University in 2003 and his MSc. degree in Mechatronics Engineering from Sabanci University in 2005. He was awarded his PhD degree from the same department in 2010. His PhD thesis focused on modelling of the mechanics and dynamics of multi-axis machining operations, namely, 5-axis ball-end milling, parallel turning and parallel milling processes. Since September 2010, he has been with the AMRC (Advanced Manufacturing Research Centre) with Boeing. He is a Senior Technical Fellow leading the Machining Dynamics group and a lecturer at the University of Sheffield AMRC with Boeing. He is also a Visiting Scholar at the Global Production Engineering and Management MSc. programme at the Vietnamese German University in Ho Chi Minh. He is an Associate member of CIRP (The International Academy For Production Engineering). Dr Flavien PEYSSON is a Research Engineer at the PREDICT company, France, where he is responsible of the R&D Team. He received his M.S. in Industrial Engineering from the Marseilles University Polytechnic School, and earned his PhD, in 2009, from the Aix-Marseilles University, France. He has worked on mission-based usage and component damage accumulation. His research interests focus on formal approach and knowledge management coupled to data analysis for prognostics and health management solutions applied to large scale systems.