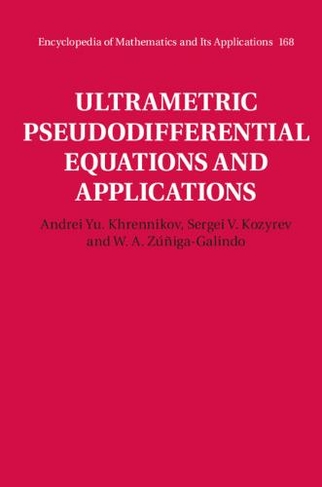 Ultrametric Pseudodifferential Equations and Applications: (Encyclopedia of Mathematics and its Applications)

Starting from physical motivations and leading to practical applications, this book provides an interdisciplinary perspective on the cutting edge of ultrametric pseudodifferential equations. It shows the ways in which these equations link different fields including mathematics, engineering, and geophysics. In particular, the authors provide a detailed explanation of the geophysical applications of p-adic diffusion equations, useful when modeling the flows of liquids through porous rock. p-adic wavelets theory and p-adic pseudodifferential equations are also presented, along with their connections to mathematical physics, representation theory, the physics of disordered systems, probability, number theory, and p-adic dynamical systems. Material that was previously spread across many articles in journals of many different fields is brought together here, including recent work on the van der Put series technique. This book provides an excellent snapshot of the fascinating field of ultrametric pseudodifferential equations, including their emerging applications and currently unsolved problems. Worked examples or Exercises; 2 Halftones, black and white; 3 Line drawings, black and white

Andrei Y. Khrennikov is Professor of Mathematics at Linnaeus University, Sweden and Director of the multidisciplinary research group International Center for Mathematical Modeling (ICMM). His research interests include the foundations of quantum physics and quantum information, the foundations of probability (in particular, studies on negative probabilities), cognitive modeling, dynamical systems, p-adic and ultrametric models in psychology, physics, and geology. He is the author of 20 monographs and around 400 papers in mathematics, physics, biology, cognitive science, economics, and finance. Sergei V. Kozyrev is a Leading Scientific Researcher in the Department of Mathematical Physics at the Steklov Mathematical Institute, Moscow. His research interests include ultrametric analysis and applications in physics and biology, stochastic limit of quantum dynamics and quantum dissipative phenomena, and mathematical models in biology. W. A. Zuniga Galindo is a Research Professor at the Center for Research and Advanced Studies of the National Polytechnic Institute, Mexico. He is a regular member of the Colombian Academy of Exact, Physical and Natural Sciences, and of the Mexican Academy of Sciences. He is also a member of the National System of Researchers of Mexico, National Researcher Level III. His work revolves around analysis, arithmetic and geometry over non-Archimedean fields (mainly p-adic fields) and their connections with mathematical physics and applications. He has published around 50 research articles and two books.