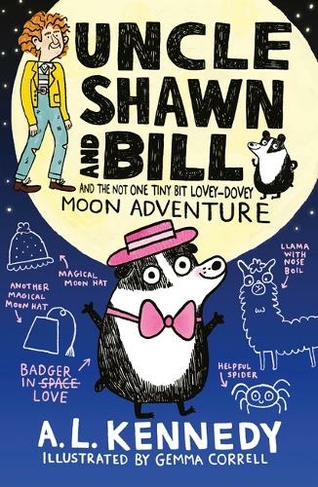 Uncle Shawn and Bill and the Not One Tiny Bit Lovey-Dovey Moon Adventure: (Uncle Shawn)

The third book in a hilarious, heart-warming series for children from Costa Award-winning author A.L. Kennedy, illustrated by celebrated cartoonist Gemma Correll. Uncle Shawn and his best friend Badger Bill are back for another brilliantly bonkers adventure. They've seen off the nasty Dr P'Klawz with the help of their trusty llama pals, and now everything on their farm up on the sunny side of Scotland is just about perfect. Apart from the moon needing rescuing and a suspicious lady badger setting her sights on Bill... What could possibly go wrong?

A.L. Kennedy is the author of three works of non-fiction, and five short story collections including All The Rage. Her seventh novel Serious Sweet was published in 2016. She won the Costa Book of the Year for her novel Day, has twice been selected as one of Granta's Best of Young British Novelists and is a Fellow of both the Royal Society of Arts and the Royal Society of Literature. She is also a dramatist and broadcaster and she has a regular blog with The Guardian Online. She lives in London; this is her first series of books for children.Gemma Correll is a cartoonist, writer, illustrator and all-round small person. She's the author of A Cat's Life (Te Neues, 2012), A Pug's Guide to Etiquette (Dog N Bone, 2013) and The Worrier's Guide to Life (Andrews McMeel, 2015) and the illustrator of Pugly Bakes a Cake (Nosy Crow, 2016) and Petunia Perry and the Curse of the Ugly Pigeon (Nosy Crow, 2015), both by Pamela Butchart. Her illustration clients include Hallmark, The New York Times, Oxford University Press, Knock Knock, Chronicle Books and The Observer.