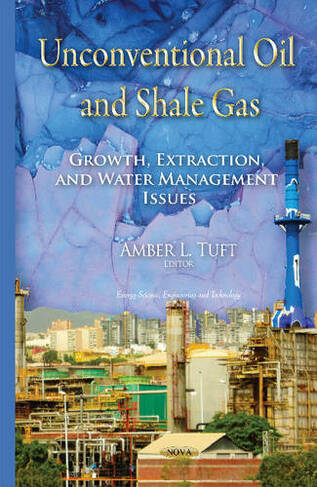 By Amber L. Tuft (Contributor)
Hardback
https://www.whsmith.co.uk/products/unconventional-oil-and-shale-gas-growth-extraction-and-water-management-issues/amber-l-tuft/hardback/9781634821308-12-000.html £152.99 rrp £169.99 Save £17.00 (10%)
GBP
Availability
In Stock
With Free Standard Delivery To Your Home Or Store
Details
Spend £25 on eligible products to receive free standard delivery to home or free next working day click and collect to store
Share

The United States has seen resurgence in petroleum production, mainly driven by technology improvements -- especially hydraulic fracturing and directional drilling -- developed for natural gas production from shale formations. Application of these technologies enabled natural gas to be economically produced from shale and other unconventional formations, and contributed to the United States becoming the world's largest natural gas producer in 2009. This book focuses on the growth in U.S. oil and natural gas production driven primarily by tight oil formations and shale gas formations. It reviews selected federal environmental regulatory and research initiatives related to unconventional oil and gas extraction, including the Bureau of Land Management (BLM) proposed hydraulic fracturing rule and Environmental Protection Agency (EPA) actions. The book also provides a technological assessment of existing and emerging water procurement and management practices in shale energy producing regions of the United States.