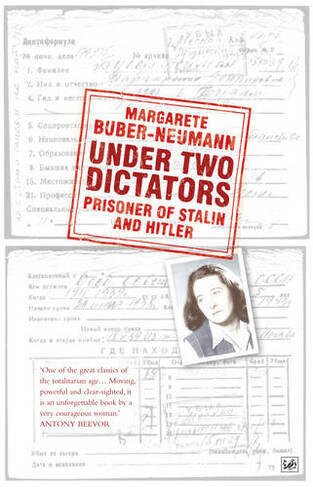 Under Two Dictators: Prisoner of Stalin and Hitler: With an introduction by Nikolaus Wachsmann

By Margarete Buber-Neumann (Author), Nikolaus Wachsmann (Contributor)
Paperback
https://www.whsmith.co.uk/products/under-two-dictators-prisoner-of-stalin-and-hitler-with-an-introduction-by-nikolaus-wachsmann/margarete-buberneumann/nikolaus-wachsmann/paperback/9781845951030-12-000.html £15.19 rrp £18.99 Save £3.80 (20%)
GBP
Availability
In Stock
Free Delivery Available When You Spend £25 Or More
Details
Spend £25 On Products To Receive Free Standard Delivery To Your Home Or Free Next Working Day Click And Collect To Store
Share

This book is a unique account by a survivor of both the Soviet and Nazi concentration camps: its author, Margarete Buber-Neumann, was a loyal member of the German Communist party. From 1935 she and her second husband, Heinz Neumann, were political refugees in Moscow. In April 1937 Neumann was arrested by the secret police, and executed by the end of the year. She herself was arrested in 1938. In Under Two Dictators Buber-Neumann describes the two years of suffering she endured in the Soviet prisons and in the huge Central-Asian concentration and slave labour camp of Karaganda; her extradition to the Gestapo in 1940 at the time of the Stalin-Hitler Friendship Pact; and her five years of suffering in the Nazi concentration and death camp for women, Ravensbruck. Her story displays extraordinary powers of observation and of memory as she describes her own fate, as well as those of hundreds of fellow prisoners. She explores the behaviour of the guards, supervisors, police and secret police and compares and contrasts Stalin and Hitler's methods of dictatorship and terror. First published in Swedish, German and English and subsequently translated and published in a further nine languages, Under Two Dictators is harrowing in its depiction of life under the rule of two of the most brutal regimes the western world has ever seen but also an inspiring story of survival, of ideology and of strength and a clarion call for the protection of democracy.

Margarete Buber-Neumann was born in 1901 in Potsdam, Germany. She married Rafael Buber - the son of Martin Buber - and had two daughters with him. After their divorce, she joined the Communist Party, married Heinz Neumann and was sent to a Soviet labour camp and later, to Ravensbruck. After the war, she was invited to Sweden for recuperation where she took an office job and wrote, in the evenings, Als Gefangene bei Stalin und Hitler (Under Two Dictators). In 1949 and 1950 she was a key witness in the Krawtschenko and Rousset trials in Paris, disproving the Communist denial of the existence of the Gulag. She spent the rest of her life in Frankfurt, writing and lecturing widely. The author of eight books, she died in Frankfurt in November, 1989.Nikolaus Wachsmann is Senior Lecturer in modern European history at Birkbeck (University of London), where he is directing a major research project on the Nazi camps. He has written widely on terror and repression in the Third Reich. His book Hitler's Prisons won the Royal Historical Society Gladstone Prize and was jointly awarded the Longman-History Today Book of the Year Award.