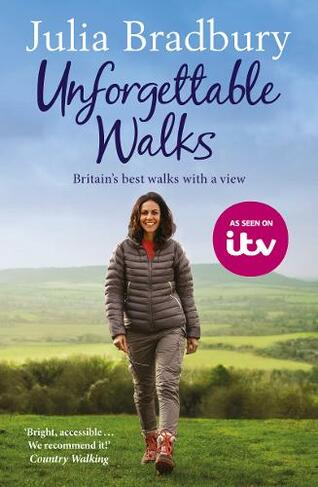 By Julia Bradbury (Author)
Paperback
https://www.whsmith.co.uk/products/unforgettable-walks-best-walks-with-a-view/julia-bradbury/paperback/9781784298821-12-000.html £9.01 rrp £10.99 Save £1.98 (18%)
GBP
Availability
In Stock
Free Delivery Available When You Spend £25 Or More
Details
Spend £25 on eligible products to receive free standard delivery to home or free next working day click and collect to store
Share

From Dorset's iconic Jurassic Coast to the picturesque Cotswolds and the rugged Peaks, join Julia Bradbury as she travels across Britain in search of the perfect walk, the perfect view - and the perfect pub. Britain is a nation of walkers. Walking is ingrained in our identity - and our passion for the countryside is stronger than ever. Unforgettable Walks takes us on eight of our beloved paths, showcasing Britain's diverse and beautiful landscape at its very best. Follow in Julia's footsteps as she explores the flora and fauna and shares the stories past and present of the people she meets along the way, and her own experiences. With beautiful hand-drawn maps, illustrations - and tips for local pubs and sights - this book will fit as well on a bookshelf as in a rucksack. The Walks Dorset: The Golden Cap Walk Cotswolds: The Cleeve Hill Walk Anglesey: The Snowdon View Walk Yorkshire Dales: The Malham Cove Walk Lake District: The Borrowdale Valley Walk Cumbria: The High Cup Nick Walk South Downs: The Birling Gap Walk Peak District: The Kinder Scout Walk

Julia was born in Dublin to a Greek mother and a Derbyshire-born father. The family moved back to the UK in the early seventies and settled in Rutland (the smallest county in Britain).Business interests of both parents also took them to Sheffield where Julia went to school. Julia's first professional engagement was in the Crucible Theatre's stage production of Peter Pan, where she donned a fishtail and got afternoons off school playing a mermaid.After leaving school she moved to London and after a short spell of working in the family fashion business, she followed her dream of working in television. In Spring 2016, Julia presented an 8-part primetime ITV series, Best Walks With a View. She will be presenting a new series, Britain's Best Walks with Julia Bradbury for ITV in January 2017.