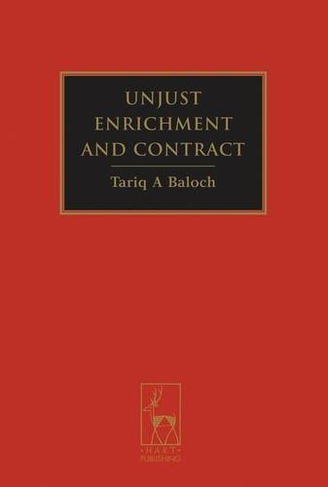 This book examines the role of unjust enrichment in the contractual context, defined as contracts which are (a) terminated for breach, or (b) subsisting, or (c) unenforceable. The book makes three claims in relation to the orthodox common law account of restitution (founded on unjust enrichment) in the contractual context. Firstly, the orthodox account correctly proceeds on the basis that the restitutionary claim in the contractual context is founded on an independent cause of action in unjust enrichment, rather than some equitable notion of unconscientiousness or the law of contract. Secondly, the book departs from the orthodox account by rejecting the unjust factors approach and endorsing the absence of basis approach for the law of unjust enrichment. Finally, the book argues that the right to restitution in the contractual context should be determined by the conditionality of the transfer of the benefit rather than a requirement such as the termination of the contract, as the orthodox account dictates. To that end the book proposes the following model, under which the right to restitution in the contractual context is determined by the resolution of the following two questions: (1) Was the transfer of the benefit (eg of money or services) conditional? (2) Was there a qualifying failure of condition? A condition can be, and often is, the other contracting party's counter-performance, but it may also be an event not promised by either party. What qualifies as a failure of condition depends on the type of contract in question. This book identifies two types of contracts, namely those which are apportioned (eg instalment contracts) and those which are unapportioned. It is only in relation to the latter that termination is required. It is a particular strength of the book that it is underpinned by detailed and original historical analysis which makes a novel and distinct contribution to the history of the laws of unjust enrichment and contract. 'Dr Baloch has produced the definitive study of the inter-relationship between contract and unjust enrichment. This has been achieved by carefully considering the historical roots of our common law, and how this is to be understood in its best light in the modern era.' Robert H Stevens, University College, London. 'Dr Baloch's exploration of the boundary between contractual and unjust enrichment liability in the 17th to 19th centuries has important things to say about the history of ideas of 'contract' in this period.' Mike Macnair, Oxford University. 'This is an innovative and rigorous book which engages with one of the most difficult areas in the law of unjust enrichment, namely the relationship between the law of unjust enrichment and the law of contract. Baloch roots his treatment of the modern law in its history and the historical analysis throughout is very careful and well grounded in the primary sources.' David Ibbetson, Cambridge University. 'This is a valuable book, thoughtful and well researched. It is concerned to build a model that fits comfortably with the cases, and its focus is on the work of modern commentators. Those concerned with the relationship of contract and the law of restitution whether at a theoretical level or in practice will benefit by careful study of what Dr Baloch has to say, whether or not they agree with it.' Jack Beatson, Royal Courts of Justice, 14 February 2009 (From the foreword) black & white illustrations

Tariq A Baloch is an Associate within the International Arbitration Group of Freshfields Bruckhaus Deringer in Paris; he was formerly a Lecturer in Laws at the London School of Economics and Political Science, where he is currently a Visiting Fellow.