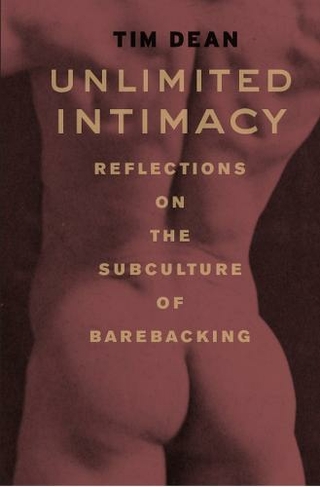 Unlimited Intimacy: Reflections on the Subculture of Barebacking

Barebacking - when gay men deliberately abandon condoms and embrace unprotected sex - has incited a great deal of shock, outrage, anger, and even disgust, but very little contemplation. Purposely flying in the face of decades of safe-sex campaigning and HIV/AIDS awareness initiatives, barebacking is unquestionably radical behavior, behavior that most people would rather condemn than understand. Thus the time is ripe for "Unlimited Intimacy", Tim Dean's riveting investigation into barebacking and the distinctive subculture that has grown around it. Audacious and undeniably provocative, Dean's profoundly reflective account is neither a manifesto nor an apology; instead, it is a searching analysis that tests the very limits of the study of sex in the twenty-first century. Dean's extensive research into the subculture provides a tour of the scene's bars, sex clubs, and Web sites; offers an explicit but sophisticated analysis of its pornography; and, documents his own personal experiences in the culture. But ultimately, it is HIV that animates the controversy around barebacking, and "Unlimited Intimacy" explores how barebackers think about transmitting the virus - especially the idea that deliberately sharing it establishes a new network of kinship among the infected. According to Dean, intimacy makes us vulnerable, exposes us to emotional risk, and forces us to drop our psychological barriers. As a committed experiment in intimacy without limits - one that makes those metaphors of intimacy quite literal - barebacking thus says a great deal about how intimacy works. Written with a fierce intelligence and uncompromising nerve, "Unlimited Intimacy" will prove to be a milestone in our understanding of sexual behavior.

Tim Dean is professor of English and director of the Humanities Institute at the University at Buffalo. He is the author or editor of several books, including Beyond Sexuality, also published by the University of Chicago Press.