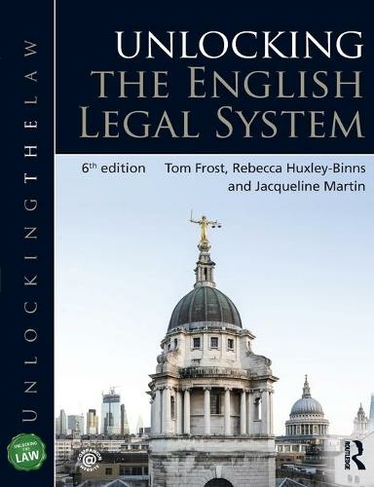 Also available on eBook for £28.07. Click here to purchase from Rakuten Kobo

Unlocking the English Legal System will help you grasp the main concepts of the legal system in England and Wales with ease. Containing accessible explanations in clear and precise terms that are easy to understand, it provides an excellent foundation for learning and revising. This edition also contains four new chapters: on European Law and the English Legal System; Legal Reasoning; Alternative Dispute Resolution; and Legal Skills and Examination Preparation. In addition, this edition considers the legal consequences of the UK's decision to leave the EU, or 'Brexit'; the proposed Solicitors Qualifying Examination that will be introduced in 2021; the Lammy Review of Black, Asian and Minority Ethnic (BAME) representation in the Criminal Justice System; and the proposals for a new Online Court in the civil justice system. The books in the Unlocking the Law Series get straight to the point and offer clear and concise coverage of the law, broken-down into bite-size sections with regular recaps to boost your confidence. They provide complete coverage of both core and popular optional law modules, presented in an innovative, visual format. 68 Illustrations, color

Tom Frost is Lecturer in Legal Theory at the University of Sussex (http://orcid.org/0000-0002-8990-4158). Rebecca (Becky) Huxley-Binns is Pro-Vice-Chancellor (Education) at the University of Hull, having previously held the role of Vice-Provost, Academic Enhancement, at the University of Law. She was Law Teacher of the Year in 2010. Becky became a National Teaching Fellow in 2012 and Principal Fellow of the HEA in 2017. Jacqueline Martin practised as a barrister for ten years before becoming a law lecturer. She was also chief examiner for a major awarding body for ten years, and has written and edited many law textbooks.