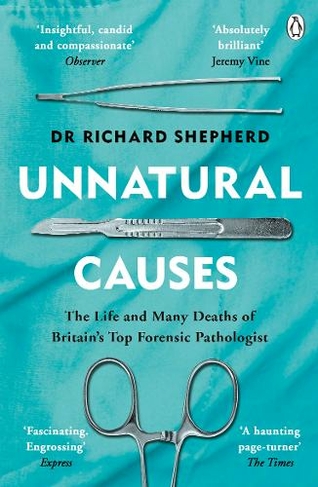 By Richard Shepherd (Author)
Paperback
Unnatural Causes: 'An absolutely brilliant book. I really recommend it, I don't often say that' Jeremy Vine, BBC Radio 2 is rated 3.0 out of 5 by 1.
https://www.whsmith.co.uk/products/unnatural-causes-an-absolutely-brilliant-book-i-really-recommend-it-i-dont-often-say-that-jeremy-vin/richard-shepherd/paperback/9781405923538-12-000.html £7.37 rrp £8.99 Save £1.62 (18%)
GBP
Availability
In Stock
Free Standard Delivery on orders over £25
Details
FREE SHIPPING over £25 for Standard Delivery
Share

THE TRUE CRIME BOOK OF THE YEAR AND SUNDAY TIMES TOP 10 BESTSELLER 'One of the most fascinating books I have read in a long time. Engrossing, a haunting page-turner. A book I could not put down' The Times, BOOKS OF THE YEAR __________ Meet the forensic pathologist, Dr Richard Shepherd. He solves the mysteries of unexplained or sudden death. He has performed over 23,000 autopsies, including some of the most high-profile cases of recent times; the Hungerford Massacre, the Princess Diana inquiry, and 9/11. He has faced serial killers, natural disaster, 'perfect murders' and freak accidents. His evidence has put killers behind bars, freed the innocent, and turned open-and-shut cases on their heads. Yet all this has come at a huge personal cost. Unnatural Causes tells the story of not only the cases and bodies that have haunted him the most, but also how to live a life steeped in death. Thoughtful, revealing, chilling and always unputdownable, if you liked All That Remains, War Doctor and This is Going to Hurt you'll love this. __________ Included in The Times Books of the Year 2018 'Gripping, grimly fascinating, and I suspect I'll read it at least twice' Evening Standard 'A deeply mesmerising memoir of forensic pathology. Human and fascinating' Nigella Lawson 'An absolutely brilliant book. I really recommend it, I don't often say that but it's fascinating' Jeremy Vine, BBC Radio 2 'Puts the reader at his elbow as he wields the scalpel' Guardian 'Fascinating, gruesome yet engrossing' Richard and Judy, Daily Express 'Fascinating, insightful, candid, compassionate' Observer

Rated 3 out of 5 by Valerian70 from The Psychology of a Pathologist 3.5 Stars There is a rather prurient interest in reading this kind of book, one that we are often loathe to admit to ourselves let alone others. A sort of feeling that by facing what can happen means it won't happen to us. This book reminds us that it can happen to anyone - post mortems aren't exclusively for victims of crime, they are for anyone who dies without a clear cause of death (not covered here are the quite rigorous set of rules that govern what this entails - usually sudden death or a death not expected from a diagnosed condition) and even if the cause seems clear to the families the medical profession may not be as certain and so under the knife we go. As you can tell I have experience of this profession from both a member of a deceased person's family and as a former Funeral Director. It pleased me that the description of a morgue was accurate, along with the strong sense of camaraderie and humour that permeates these places. Due respect is shown to the deceased but without humour you would find yourself in a very dark place emotionally very quickly; although the two I frequented ran on coffee and not tea but biscuits were in constant supply and good ones too. This comes across very strongly in this book and it was refreshing to see a professional admit to the effect the trauma piled upon trauma had on his long term mental health, it does much to take away the stigma of the condition. I did find that it glossed over much of the procedures and the interminable waits for histology and toxicology. The progression of the field through the changes in forensic techniques and the development of DNA analysis was interesting but was very much a generalised overview without covering the pitfalls of depending on these techniques. This is not always the case and Dr Shepherd is not afraid to point out things that have been wrong in the past with the way investigations in to disasters have been carried out, especially those he was involved in himself. On the whole it is well told and the author has a strong voice throughout. There is a bit of jumping around the timeline which can be disorientating and it is clear that this book is more or less written as a therapeutic aid rather than an out and out biography. It also left me with questions about many of the natural death cases investigated and, especially, those home deaths that were less clear cut. I was hoping for more of an examination of how these people could have met their demise, more along the lines of Autopsy, The Last Hours Of series which Dr Shepherd himself fronted (indeed, this was the very reason I bought the book). Unfortunately, if that is what you are looking for you will not find it here.

Richard Shepherd was born in West London but grew up in Watford. At the local grammar school he was introduced to a medical textbook smuggled into the classroom by a friend which opened his eyes to the world of crime and murder, setting him on a lifelong quest to understand death in its many forms. He trained as a doctor at St George's Hospital medical school at Hyde Park Corner, qualifying in 1977 and then completed his postgraduate training as a forensic pathologist in 1987. He immediately joined what was then the elite forensic department at Guy's Hospital. He has been involved nationally and internationally in the forensic investigation of thousands of deaths from unnatural causes, from headline-making murders to mass natural disasters, and many sudden and unexplained deaths that his investigations showed were from natural causes or due to accidents. His skills and expertise still remain in demand around the world.