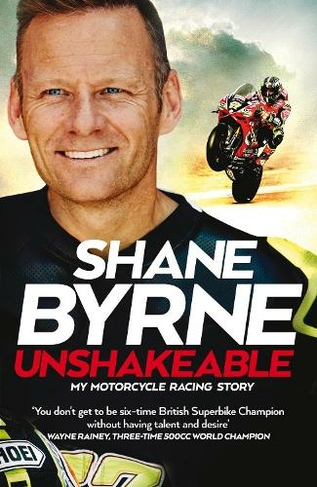 By Shane Byrne (Author)
Hardback
https://www.whsmith.co.uk/products/unshakeable/shane-byrne/hardback/9781529034325-03-000.html £11.99 rrp £20.00 Save £8.01 (40%)
GBP
Availability
In Stock
Free Delivery Available When You Spend £15 Or More
Details
Spend £15 On Eligible Products To Recieve Free Standard Delivery To You Home Or Free Next Working Day Click And Collect To Store
Share

Shane 'Shakey' Byrne knows what it is like to live on the edge. The most successful rider in British Superbike history, he is the only person to have won the championship six times. Shakey is a living motorbike legend, with legions of fans across the country. For the first time Shakey tells his life story, from being abandoned as a newborn baby in a London hospital, to multiple brushes with the law and working night shifts on the London Underground to fund his early racing career. Whether it was on his BMX or joyriding through Kent, the only thing Shakey ever wanted to do was race motorbikes. Once he had got his break, Shakey quickly developed a reputation as one of the most exciting riders of his generation, and the thrill of every victory, every chicane and every overtake, as well as the hospital visits and painstaking recovery, is relived in heart-pumping detail. Unshakeable is an incredible story of winning and risk-taking, of horrendous crashes in which he nearly lost his life, of Ducatis and monster motorhomes, and of hard-fought glory in one of the most exciting and dangerous sports on the planet. Told with breathless exhilaration, Shakey's story is one of inspiration, break-neck speed and a life lived truly on, and over, the limit.

Shane 'Shakey' Byrne is the most successful rider in the history of the British Superbike Championship, boasting an unprecedented six titles and almost one hundred career victories - a record that promises to remain unbroken for many years to come. A World Superbike race winner and former MotoGP World Championship contender, with his cheeky Kent charm and fierce determination to win, Shakey's success on the track has been mirrored by his popularity off it, and his army of loyal fans are testament to his reputation as one of the most celebrated British motorcycle racers of his generation. Away from the racetrack, Shane is a dedicated husband to Petra and proud father of Zack and Lilly.