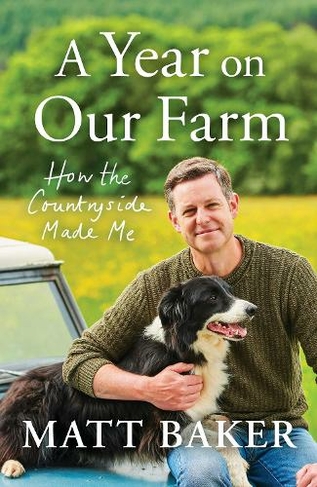 A Year on Our Farm: How the Countryside Made Me

In his first-ever book A Year on Our Farm, Matt Baker gives us a glimpse into his life away from the glitz and glamour of life in front of a camera; on his farm in the Durham Hills. With hand-drawn illustrations, Matt takes us on a journey through the seasons, from the long winter months to the dawning of the spring and summer.

At his happiest on the farm, away from his hosting responsibilities, along with his family, dogs, sheep miniature donkeys, and a myriad of wildlife, Matt gives us an insight into what life is really like on the farm and how it has helped shape the person he is today.

With moments from his TV career through to seeing woodland animals emerge after hibernation, A Year on Our Farm celebrates the beauty of the countryside and how inspiring it can be for us all!

Matt Baker is our much-loved television presenter, and from Blue Peter, to Countryfile, to The One Show, he has charmed a nation. Matt grew up in County Durham on a hill farm before his career in entertainment began. As a teenager he was a British champion gymnast and when Blue Peter was looking for a new presenter Matt put together a striking showreel somersaulting in the farmyard and riding a unicycle. In his seven years on the show Matt won two BAFTAs for Best Presenter two years in a row and a Royal Television Society Award.Matt has also presented Radio 4's Open Country, Secret Britain, One Man and His Dog, as well as starring in a host of musicals and presenting BBC Sport's Gymnastics coverage for many years. Matt has raised over 40 million pounds for Children In Need with his Rickshaw Challenge, and is also a trustee of the charity.Matt lives with his wife, children, his sheepdogs and his many beloved farm animals.