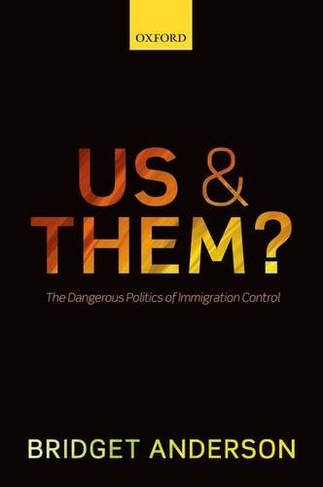 Us and Them?: The Dangerous Politics of Immigration Control

Us and Them? explores the distinction between migrant and citizen through using the concept of 'the community of value'. The community of value is comprised of Good Citizens and is defined from outside by the Non-Citizen and from the inside by the Failed Citizen, that is figures like the benefit scrounger, the criminal, the teenage mother etc. While Failed Citizens and Non-Citizens are often strongly differentiated, the book argues that it is analytically and politically productive to to consider them together. Judgments about who counts as skilled, what is a good marriage, who is suitable for citizenship, and what sort of enforcement is acceptable against 'illegals', affect citizens as well as migrants. Rather than simple competitors for the privileges of membership, citizens and migrants define each other through sets of relations that shift and are not straightforward binaries. The first two chapters on vagrancy and on Empire historicise migration management by linking it to attempts to control the mobility of the poor. The following three chapters map and interrogate the concept of the 'national labour market' and UK immigration and citizenship policies examining how they work within public debate to produce 'us and them'. Chapters 6 and 7 go on to discuss the challenges posed by enforcement and deportation, and the attempt to make this compatible with liberalism through anti-trafficking policies. It ends with a case study of domestic labour as exemplifying the ways in which all the issues outlined above come together in the lives of migrants and their employers.

Bridget Anderson is Professor of Migration and Citizenship, and Deputy Director and Senior Research Fellow at the Centre on Migration, Policy and Society (COMPAS), Oxford University. Bridget Anderson's research interests include low waged labour migration, deportation, legal status, and citizenship. Publications include Doing the Dirty Work? The Global Politics of Domestic Labour (Zed Books 2000) and Who Needs Migrant Workers? Labour Shortages,Immigration and Public Policy (OUP 2010), co-edited with Martin Ruhs. She has worked with a wide range of national and international NGOs including the Trades Union Congress, the Organisation for Security and Co-operation in Europe, and the International Labour Organisation.