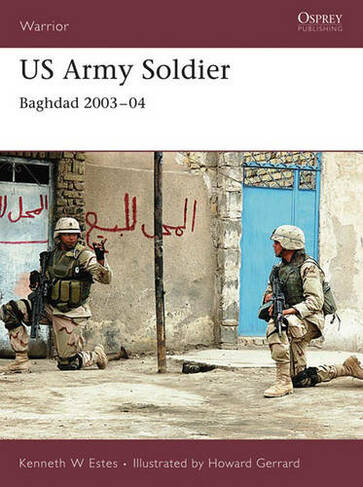 By Kenneth W. Estes (Author), Howard Gerrard (Illustrator)
Paperback
https://www.whsmith.co.uk/products/us-army-soldier-occupation-of-baghdad-warrior-v-113/kenneth-w-estes/howard-gerrard/paperback/9781846030635-01-000.html £11.95 rrp £12.99 Save £1.04 (8%)
GBP
Availability
Currently unavailable. We don't know when or if this item will be back in stock
Free Saver Delivery on orders over £20
Details
FREE SHIPPING over £20 for Saver Delivery
Share

In April 2003, after a month of heavy bombardment, Baghdad fell under coalition forces' control. The forces established the Coalition Provisional Authority and an 8 km square mile "Green Zone" was formed to maintain order until the new Iraqi government became a reality. This book details the stabilization operations and the experiences of US Task Force 1st Armored Division (TF 1AD), who lived and fought under extreme conditions and whose activities were center stage in a controversial debate surrounding the occupation. Discussed are the soldiers' personal experiences from recruitment, specialist training, and weaponry; to the aftermath and effects that the conflict had on them. The author, Ken Estes, uses interviews and recently declassified material to offer a full and accurate insight into this controversial theater of war. col. Illustrations

Kenneth W Estes is a 1969 Naval Academy graduate who served in a variety of command and staff assignments in the US Marine Corps until his retirement in 1993. He earned his doctorate in European History in 1984 and has taught at Duke University, the US Naval Academy, and local schools. He is the editor of several books, and has written extensively in military and academic journals throughout his career. He was made an Honorary Legionnaire in the Spanish Legion in 1992. The author lives in Washington, USA.