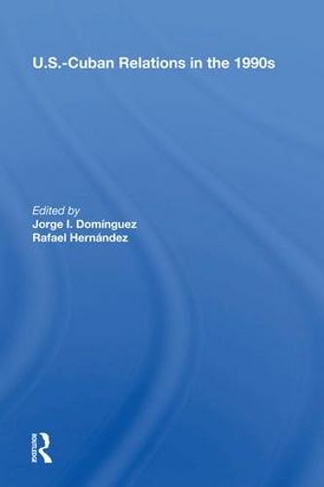 The contributors and editors purpose in this book is to sketch where and why the United States and Cuba differ; to identify the issues where differences are likely to endure because they stem from the central values and interests of such different political and economic regimes; and to point to those other issues where skillful diplomacy might fin

Jorge I. Dominguez is the Antonio Madero Professor for the Study of Mexico and was Vice Provost for International Affairs at Harvard University, Massachusetts from 2006-15. He is the author of Democratic Politics in Latin America and the Caribbean (1998), Cuba: Order and Revolution (1978) and Cuba hoy: Analizando su pasado, imaginando su futuro (2006). He is also author and co-editor of Cuban Economic and Social Development: Policy Reforms and Challenges in the 21st Century (2012). He is a past editor of the journal Cuban Studies and a past president of the Latin American Studies Association. Rafael Hernandez, a political scientist, is Head of North American Studies at the Centro de Estudios sobre America and a member of the faculty of the University of Havana. An author of numerous articles on international relations, he is a founding member of the Editorial Board of the Revista Cuadernos de Nuestra America.