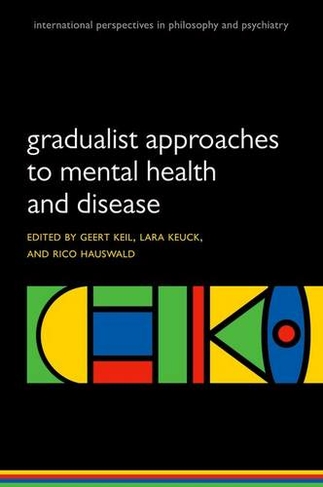 Vagueness in Psychiatry: (International Perspectives in Philosophy and Psychiatry)

Also available on eBook for £39.59. Click here to purchase from Rakuten Kobo

In psychiatry there is no sharp boundary between the normal and the pathological. Although clear cases abound, it is often indeterminate whether a particular condition does or does not qualify as a mental disorder. For example, definitions of subthreshold disorders and of the prodromal stages of diseases are notoriously contentious. Philosophers and linguists call concepts that lack sharp boundaries, and thus admit of borderline cases, vague. Although blurred boundaries between the normal and the pathological are a recurrent theme in many publications concerned with the classification of mental disorders, systematic approaches that take into account philosophical reflections on vagueness are rare. This book provides interdisciplinary discussions about vagueness in psychiatry by bringing together scholars from psychiatry, psychology, philosophy, history, and law. It draws together various lines of inquiry into the nature of gradations between mental health and disease and discusses the individual and societal consequences of dealing with blurred boundaries in medical practice, forensic psychiatry, and beyond. Part I starts with an overview chapter that helps readers to navigate through the philosophy of vagueness and through the various debates surrounding demarcation problems in the classification and diagnosis of mental illness. Part II encompasses historical and recent philosophical positions on gradualist approaches to health and disease. Part III approaches the vagueness of present psychiatric classification systems and the debates concerning their revision by scrutinizing controversial categories such as post-traumatic stress disorder and by looking into the difficulties of day-to-day diagnostic and therapeutic practice. Part IV finally focuses on social, moral, and legal implications that arise when being mentally ill is a matter of degree.

Geert Keil is Professor of Philosophy at Humboldt-Universitat Berlin. He studied philosophy, linguistics and German literature at the Universities of Bochum and Hamburg. In 1991, he received his PhD with a book on philosophical naturalism. In 1999 he received his Habilitation (second dissertation) with a book on causation and agency. Awarded with a Feodor Lynen scholarship of the Humboldt Foundation and a Heisenberg scholarship of the German Research Foundation(DFG), he was a visiting scholar at the Universities of Trondheim, Stanford and Basel. From 2005 to 2010 he held a chair in theoretical philosophy at RWTH Aachen University. He co-directed the research project <"Dealing Reasonably with Blurred Boundaries> " (2009-2013). His main areas of research are thephilosophy of mind and action, philosophy of language, epistemology and metaphysics.Lara Keuck is a Research Scholar at the Department of History at Humboldt University Berlin and a 'Society in Science - Branco Weiss Fellow' of ETH Zurich. Her research interests lie in the history and philosophy of the biomedical sciences, broadly construed. She has published on epistemological issues surrounding the classification and modelling of mental disorders in History and Philosophy of the Life Sciences, Medicine Studies, Journal of Medical Ethics, and Studies in History and Philosophyof Biological and Biomedical Sciences. In 2012, she was awarded the Prize for Philosophy in Psychiatry of the German Association of Psychiatry, Psychotherapy and Psychosomatics (DGPPN).Rico Hauswald studied philosophy and sociology in Dresden, Germany, and Fribourg, Switzerland. In 2013, he did his PhD at Humboldt University of Berlin with a thesis about the classification of people in the social and medical sciences. He is currently a research fellow at Dresden University of Technology. His areas of specialization include the philosophy of medicine, general philosophy of science, social epistemology, and social ontology. His recent publications include <"The Ontology ofInteractive Kinds> " (forthcoming in the Journal of Social Ontology), the monograph Soziale Pluralitaten (Munster: Mentis 2014), and the volume Warum ist uberhaupt etwas und nicht vielmehr nichts? (Hamburg: Meiner 2013, co-edited with D. Schubbe and J. Lemanski).