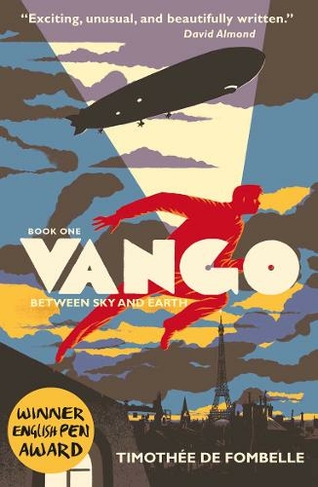 Vango: Between Sky and Earth

A gripping mystery-adventure about a desperate search for identity by critically acclaimed author, Timothee de Fombelle. In a world between wars, Vango is on the cusp of taking priestly vows when he is suddenly made a fugitive. Fleeing from the police who blame him for murder, as well as more sinister forces with darker intentions, Vango attempts to trace the secrets of his shrouded past and prove his innocence before all is lost. This is a breathless and highly cinematic story that follows Vango from Scotland to the Soviet Union and from the rooftops of Paris to Nazi Germany. Centred on a mysterious, unforgettable, and romantic protagonist, Vango tells a thrilling story sure to captivate lovers of daring escapades and subversive literary heroes.

Timothee de Fombelle is a much-admired French playwright, as well as the author of award-winning fiction. His first series, Toby Alone and Toby Alone and the Secrets of the Tree has been printed in 27 languages and has won numerous awards including France's prestigious Prix Sorcieres and the Marsh Award. Timothee's adventure series, Vango, Book One: Between Sky and Earth and Vango, Book Two: A Prince Without a Kingdom received huge critical acclaim, and book one was granted an English Pen Award for translation. Timothee was also one of the writers who contributed to the acclaimed collection, The Great War: an Anthology of Stories Inspired by Objects from the First World War. Timothee lives in Paris, where he continues to write for the stage.Sarah Ardizzone is one of the most sought-after translators working today. She has won several awards for her work, including the 2007 Scott-Moncrieff Prize for Just Like Tomorrow (Kif Kif Demain) by Faiza Guene and the 2005 Marsh Award for Eye of the Wolf (L'oeil du Loup) by Daniel Pennac, and the 2009 Marsh Award for the translataion of Toby Alone (Tobie Lolness) by Timothee de Fombelle. Sarah lives in London, SW2.