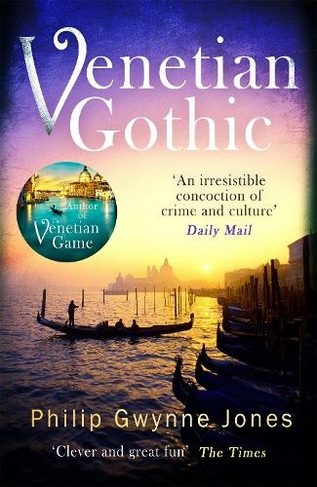 By Philip Gwynne Jones (Author)
Paperback
£7.37 rrp £8.99 Save £1.62 (18%)
GBP
Availability
Available / dispatched within 1 - 2 weeks
Free Delivery Available When You Spend £15 Or More
Details
Spend £15 On Products To Receive Free Standard Delivery To Your Home Or Free Next Day Click and Collect To Stores
Share

'A riveting story of deception and corruption' Daily Mail 'A must for all Italy lovers' David Hewson Even the most beautiful city on earth has a dark side . . . It is November 2nd, 2017. All Souls Day. On the Day of the Dead, the citizens of Venice make their way to the cemetery island of San Michele to pay their respects to the departed. When an empty coffin is unearthed in the English section of the graveyard, a day of quiet reflection for Nathan Sutherland becomes a journey into the dark past of a noble Venetian family. A British journalist, investigating the events of forty years previously, disappears. A young tourist - with an unhealthy interest in Venice's abandoned islands - is found drowned in the icy lagoon. A terrible secret is about to be brought to light, and a deadly reckoning awaits on Venice's Isle of the Dead. Praise for Philip Gwynne Jones 'An unputdownable thriller' Gregory Dowling 'Pure pleasure' Literary Review 'Clever and great fun' The Times 'An irresistible concoction of crime and culture' Daily Mail 'Superb - always gripping, beautifully constructed and vivid' Stephen Glover 'Sinister and shimmering . . . as haunting and darkly elegant as Venice itself' L. S. Hilton, bestselling author of Maestra 'Gwynne Jones' entertaining take on his beloved Venice is as delightful as a Spritz by the Rialto - a must for all Italy lovers' David Hewson 'It is no surprise to find that Philip Gwynne Jones lives in Venice... art and architecture interweave into a story that builds to an almost surreal climax' Daily Mail 'The Venetian setting is vividly described' Literary Review 'Un-put-downable . . . If you love Venice, you'll love this because you'll be transported there in an instant. If you've not been to Venice, read this book and then go' Reader reviewer, 5 stars

Philip Gwynne Jones was born in South Wales in 1966, and lived and worked throughout Europe before settling in Scotland in the 1990s. He first came to Italy in 1994, when he spent some time working for the European Space Agency in Frascati, a job that proved to be less exciting than he had imagined.He spent twenty years in the IT industry before realising he was congenitally unsuited to it. Furthermore, an attempt to find a secure, well-paid job with a proper pension had resulted in him finding himself in the IT department of a large Scottish bank during the global financial crisis.Something, clearly, had to change. And so it was that - following a conversation with a man in a pub - Philip and Caroline left their jobs, sold their flat and moved to Venice in search of a better, simpler future. They were wrong about the 'simpler' bit . . .Philip now works as a teacher, writer and translator, and lives in Venice with Caroline. He enjoys cooking, art, classical music and opera; and can occasionally be seen and heard singing bass with Cantori Veneziani and the Ensemble Vocale di Venezia.