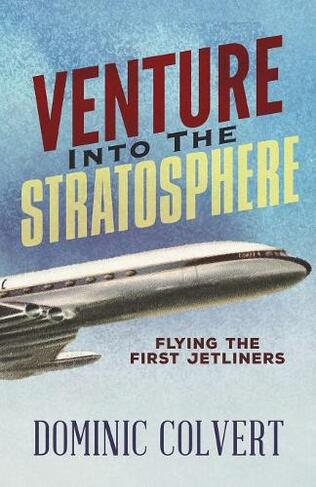 Venture into the Stratosphere: Flying the First Jetliners

Serves as an intriguing story. Reveals an untold History that arouses the curiosity of those with a general aviation interest, but particularly those with a connection to the introduction of jetliners. Provides a window on cultural developments after the turn of the century brought new technologies that are subtly shaping behavior and values. Evokes nostalgia, challenges, and sentimentality with regards to psychological shifts. There are about 2.5 M airline passengers per day

After discharge from the Irish Air Corps, Dominic Colvert continued his career in aviation by becoming a flight engineer on the first jetliners, de Havilland Comets. The work as flight crew for BOAC (British Overseas Airway Corporation) was challenging as the airline developed new frontiers in aviation and new routes to exotic destinations worldwide. Returning to school, Dominic earned an MS in Engineering from University of California, Berkeley, before working in engineering and management at various Silicone Valley companies, and as adjunct faculty at Embry Riddle University. At the heart of these work and study situations was a common focus on technology and the human factors involved. With the changing work emphasis, he published articles in Industrial Engineer, Fidelity, and Wild West magazines. His most recent publication is a controversial topic, The Letters of Peter H. Burnett: Realism and The Roots of California. Dominic lives and writes in Palo Alto, CA, but was born and married in London, England. His military years were lived in Dublin, Ireland, and he remembers with nostalgia the years in San Francisco while attending UCB and his homestead in San Carlos, California.