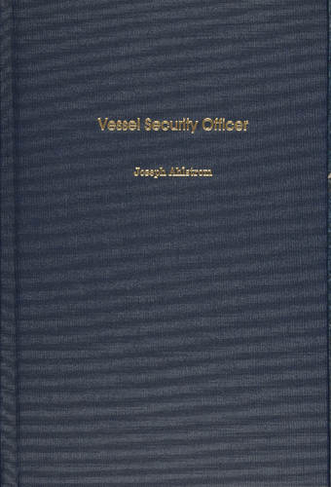 Keeping a ship safe and secure occurs through the investment of time and effort by both the Vessel Security Officer and the crew. Some of the topics covered in this volume include training, drills, exercises, and recordkeeping; threat assessment and analysis; creating a vessel security plan; and maritime terrorism. The appendices contain a Declaration of Security and 33 CFR Part 104 among other documents. This text complements any security course and can serve as a training handbook for a Vessel/Ship Security Officer or Company Security Officer. 7 b/w photos, 2 illustrations

Captain Joseph Ahlstrom, author of Vessel Security Officer, is a graduate of the State University of New York (SUNY) Maritime, with a bachelors degree in marine transportation. He completed his masters degree in transportation management with honors from SUNY Maritime College. Captain Ahlstrom has commanded six merchant ships, including a tanker, containership, breakbulk carrier, and research and training ship. He sailed for fifteen years in the U.S. and Foreign Merchant Marine. In January 1996, Captain Ahlstrom started teaching at SUNY Maritime College. During his time at SUNY Maritime he was captain of the Training Ship Empire State from 1998-2000. He also was chairman of the Marine Transportation Department from 2003 until May 2005. He currently is an associate professor, focusing on Maritime Security and Maritime Communications. In addition to being an unlimited Master Mariner, Captain Ahlstrom is a Captain (0-6) in the United States Navy Reserve. He lives on Staten Isl