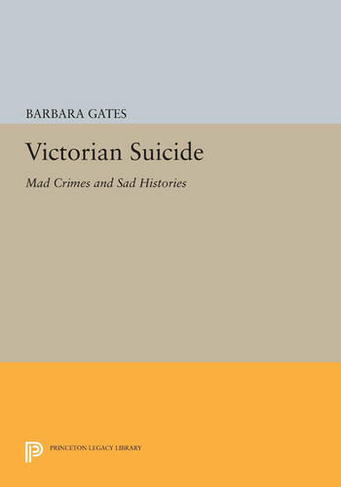 When Viscount Castlereagh, leader of the House of Commons and architect of the Grand Alliance, committed suicide in 1822, the coroner's inquest could consider only two legal verdicts: insanity or self-murder. Public outrage greeted his burial in Westminster Abbey; the tradition lingered that a suicide's burial place be at a crossroads, with a stake through the heart to keep the lost soul from wandering. Probing a remarkable variety of sources and individual cases, Barbara Gates shows how attitudes toward suicide changed between Castlereagh's death and the end of the century. By 1900 the Victorians' moral censure of suicide and the accompanying denial that it was a widespread problem had been replaced by a more compassionate response--and also by an unfounded belief in a "suicide epidemic," which Thomas Hardy described as a "coming universal wish not to live.". Exposing a rich area of interaction between history and literature, and utilizing the methodology of the new historicism, Gates discusses topics ranging from the plot for Wuthering Heights to Victorian shilling shockers. Among other findings she includes evidence that Victorian middle-class men, particularly, tended to make suicide the province of other selves--of men belonging to other times or places, of "monsters," or of women. Originally published in 1988. The Princeton Legacy Library uses the latest print-on-demand technology to again make available previously out-of-print books from the distinguished backlist of Princeton University Press. These editions preserve the original texts of these important books while presenting them in durable paperback and hardcover editions. The goal of the Princeton Legacy Library is to vastly increase access to the rich scholarly heritage found in the thousands of books published by Princeton University Press since its founding in 1905.