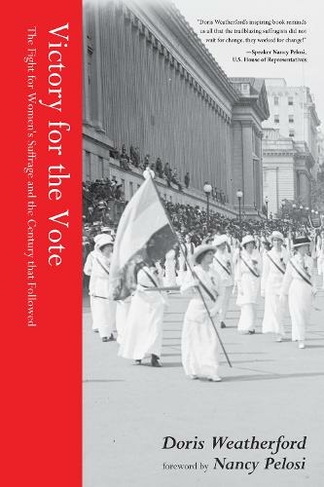 Victory for the Vote: The Fight for Women's Suffrage and the Century that Followed (Book About Womens Right to Vote, Suffragettes, Womens' Suffrage, and Readers of Why They Marched)

Women's Rights and the Continuing Fight for EqualityAn inspirational gift for women. In her book Victory for the Vote, Women's history expert Doris Weatherford offers an engaging and detailed narrative history of women's seven-decade fight for the vote, and the continuing current-day struggle for human rights and equality. Foreword by Speaker of the House Nancy Pelosi. Victory for the Vote puts the fight for suffrage into contemporary context by discussing key challenges for women in the decades that followed 1920, such as reproductive rights, the Equal Rights Amendment, and political power. Celebrate the Centennial of women's right to vote in the U.S. Victory for the Vote is an expansion and update of Doris Weatherford's A History of the American Suffragist Movement, published in 1998 in honor of the 150th anniversary of the 1848 Seneca Falls Convention, considered to be the beginning of the women's rights movement in the United States. Read Doris Weatherford's Victory for the Vote and: Take pride in the struggles and accomplishments of strong women Understand and appreciate the Women's Suffrage Movement and the Nineteenth Amendment Celebrate feminism and recognize the challenges that still remain on the road to human rights for all If you enjoyed books such as Maya Angelou's I Know Why the Caged Bird Sings, The Woman's Hour, Rad Women Worldwide, Warriors Don't Cry, or The Book of Awesome Women; you will want to read and be inspired by Victory for the Vote. historical/archival photos; 50 Illustrations, unspecified

Doris Weatherford is affiliated with the University of South Florida, is active in the political arena, and has been extensively recognized for her contributions to the field of women's history. She was editor-in-chief and major contributor to the monumental reference work, A History of Women in the United States: State-by-State Reference (Grolier Academic Reference, 2004), which offers detailed and engaging histories of women in each of the fifty states. Her other publications include Foreign and Female: Immigrant Women in America, 1840-1920 (1986), American Women's History: An A Z of People, Organizations, Issues and Events (1994), Milestones: A Chronology of American Women's History (1997), American Women during World War II (Routledge, 2009), and a two-volume work for Congressional Quarterly Press, Women in American Politics: History and Milestones (2012). Nancy Pelosi is the 52nd Speaker of the House of Representatives, having made history in 2007 when she was elected the first woman to serve as Speaker of the House. Now in her third term as Speaker, Pelosi made history again in January 2019 when she regained her position second-in-line to the presidency, the first person to do so in more than 60 years. As Speaker, Pelosi is fighting For The People, working to lower health care costs, increase workers' pay through strong economic growth and rebuilding America, and clean up corruption for make Washington work for all.