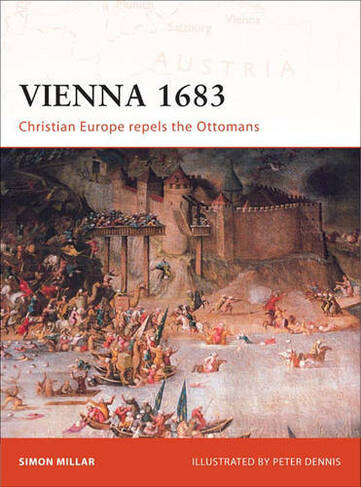 Osprey's study of a battle that was part of a triple conflict: the Polish-Ottoman War (1683-1699), the Great Turkish War (1667-1698), and the Ottoman Hapsburg Wars (1526-1791). The capture of the Hapsburg city of Vienna was a major strategic aspiration for the Islamic Ottoman Empire, desperate for the control that the city exercised over the Danube and the overland trade routes between southern and northern Europe. In July 1683 Sultan Mehmet IV proclaimed a jihad and the Turkish grand vizier, Kara Mustafa Pasha, laid siege to the city with an army of 150,000 men. In September a relieving force arrived under Polish command and joined up with the defenders to drive the Turks away. The main focus of this book is the final 15-hour battle for Vienna, which climaxed with a massive charge by three divisions of Polish winged hussars. This hard-won victory marked the beginning of the decline of the Islamic Ottoman Empire, which was never to threaten central Europe again. Illustrations

Simon Millar was born in Malaysia in 1957. He joined the British Army in 1977, and having retired in 1994 subsequently rejoined his regiment, the Irish Guards, in 2001. He has previously written Kolin 1757: Frederick the Great's First Defeat, and Assaye 1803: Wellington's first and 'bloodiest' victory for the Osprey Campaign series. The author lives in Wiltshire, UK..