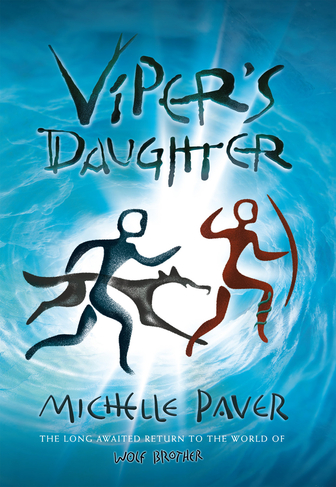 Run Wild with Wolf Brother. Million-copy-selling author, Michelle Paver immerses you in ice-cold magic and non-stop adventure, as Torak, Renn and Wolf battle for their lives and use all their skills and knowledge of nature to survive. For two summers Torak and Renn have been living in the Forest with their faithful pack-brother, Wolf. But their happiness is shattered when Renn realizes Torak is in danger - and she's the threat. When she mysteriously disappears, Torak and Wolf brave the Far North to find her. At the mercy of the Sea Mother and haunted by ravenous ice bears, their quest leads them to the Edge of the World. There they must face an enemy more evil than any they've encountered. Viper's Daughter plunges you back into the Stone Age world of Torak, Renn and Wolf: a world of demons, Hidden People and exhilarating adventure which has entranced millions of readers. Praise for Viper's Daughter: 'What rich, dazzling, immersive storytelling ... The best book I have read this year by a country mile. (By a wild arctic length of many wolf lopes, I suppose I should say)' Hilary McKay, author of The Skylarks' War 'Michelle is in a league of her own with this series and what luck for us all that she hasn't finished with Torak, Renn and Wolf's world yet' Abi Elphinstone, author of Rumblestar 'Viper's Daughter is sharp, striking, and loaded with the wisdom of the deep past. I am in awe of Paver's accomplishment' Sophie Anderson, author of The House with Chicken Legs 'Skillful, satisfying, and minutely researched, this powerful evocation of an ancient world is vivid in its imagery and captivating in its excitement' Adrienne Byrne, Muswell Hill Children's Bookshop 'Paver's love for the natural world comes across so strongly in her writing and her imagination takes you on a twisting, fantastic journey all the way to the Edge of the World' Grace Barrett, Waterstones Norwich

Michelle Paver was born in central Africa but came to England as a child. After gaining a degree in Biochemistry at Oxford University, she was a partner at a City law firm, until she gave that up to write full time. She is the author of the bestselling, award-winning series that began with Wolf Brother. The series has sold over 3 million copies in 36 territories, with acclaimed audio editions read by Ian McKellen. Viper's Daughter is the seventh book in the series. Like the others it can be read as a standalone story.