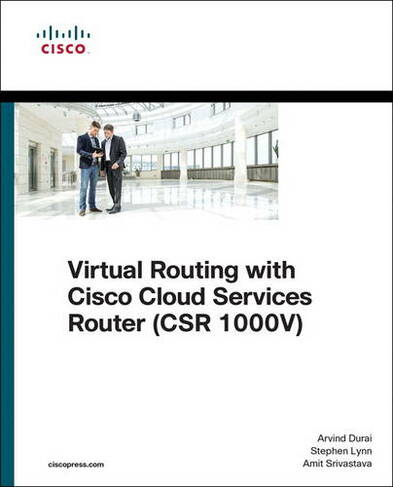 Virtual Routing in the Cloud

Also available on eBook for £31.79. Click here to purchase from Rakuten Kobo

Arvind Durai, CCIE No. 7016, is an advanced services principal architect for Cisco Systems. His primary responsibility in the past 17 years has been in supporting major Cisco customers in the enterprise sector, including financial, retail, manufacturing, e-commerce, state government, utility (smart grid networks), and health-care sectors. Some of his focuses have been on security, multicast, network virtualization, and data center, and he has authored several white papers and design guides on various technologies. He has also been involved in data center design for more than 10 years and has designed many enterprise private cloud data center environments. Arvind maintains two CCIE certifications: Routing and Switching, and Security. He holds a Bachelor of Science degree in Electronics and Communication, a Master's degree in Electrical Engineering (MS), and a Master's degree in Business Administration (MBA). He is a coauthor of two Cisco press books, Cisco Secure Firewall Services Moduleand TcL Scripting for Cisco IOS. He has coauthored IEEE WAN smart grid architecture and has been a panel member for IEEE publications. Arvind also has presented in many industry forums, such as IEEE and Cisco LIVE. Stephen Lynn, CCIE No. 5507 (Routing & Switching/WAN/Security) and CCDE No. 20130056, is an architect at Cisco Systems in the U.S. federal area. He has been with Cisco for more than 16 years and is a subject matter expert on enterprise network architecture. His focus is on large-scale network designs, including campus, WAN, and data center. As a recognized expert within Cisco and in the industry, Stephen has been working on large-scale, complex wide-area network designs in an enterprise environment. Stephen's focus has been on architectural designs involving 1,000 nodes to more than 10,000 nodes, leveraging technologies such as DMVPN, GET VPN, and FlexVPN to provide transport encryption and network segmentation over IP transport such as MPLS/Ethernet. Other areas of focus include high availability and convergence, QoS, Performance Routing (PfR), and network virtualization. Stephen is a well-known speaker who has presented at several conferences and seminars worldwide. He holds a Bachelor of Science in Electrical Engineering from the University of Virginia. Stephen is based out of the Cisco office in Washington, DC. Amit Srivastava is a senior manager with Equinix, Inc. At Equinix his team is responsible for global network and product fulfillment for Equinix's Cloud Exchange platform. Amit formerly worked as a technical leader with Cisco Systems, Inc. He has developed, tested, and enhanced network software for nearly 14 years. Before joining Cisco, he held positions in software application development, management, and testing. Amit was involved in developing embedded applications for mobile devices in his engagement with Hughes Networks prior to joining Cisco. Amit has been involved in the development cycles of new operating systems such as IOS XR and IOS XE and delivering features such as MPLS-based Layer 2 and 3 VPNs and traffic engineering. With IOS XE, Amit has worked with platforms such as ASR 1000 and CSR 1000V right from their inception, delivering enterprise-level features like IPsec, NAT, firewalls, NetFlow, AVC, and QoS. Amit holds a Bachelor of Science degree in Electrical Engineering.