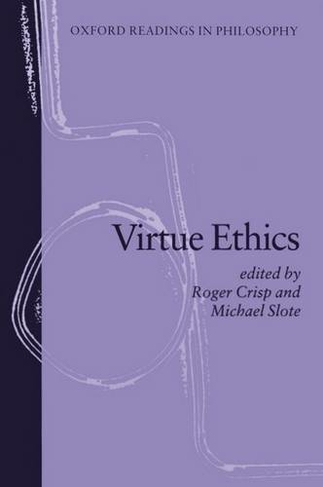 The aim of this series is to bring together important recent writings in major areas of philosophical inquiry, selected from a variety of sources, mostly periodicals, which may not be conveniently available to the university student or the general reader. The editors of each volume contribute an introductory essay on the items chosen and on the questions with which they deal. A selective bibliography is appended as a guide to further reading. This volume brings together much of the strongest and most influential work undertaken in the field of virtue ethics over the last four decades. The ethics of virtue predominated in the ancient world, and recent moral philosophy has seen a revival of interest in virtue ethics as a rival to Kantian and utilitarian approaches to morality. Divided into four sections, it includes articles critical of other traditions; early attempts to offer a positive vision of virtue ethics; some later criticisms of the revival of virtue ethics; and, finally, some recent, more theoretically ambitious essays in virtue ethics. This collection should appeal not only to students and others seeking a wider knowledge of contemporary developments in moral philosophy, but to professional philosophers as well.

Roger Crisp is Fellow and Tutor in Philosophy at St Annes College, Oxford. He edited How Should One Live? Essays on the Virtues (OUP, 1996), is an associate editor of Utilitas, and is currently working on a book on J. S. Mill's Utilitarianism.Michael Slote is Professor of Philosophy at the University of Maryland. He is the author of From Morality to Virtue, and is currently collaborating with Marcia Baron and Philip Pettit on a book debating the merits of Kantian ethics, consequentialism, and virtue ethics.