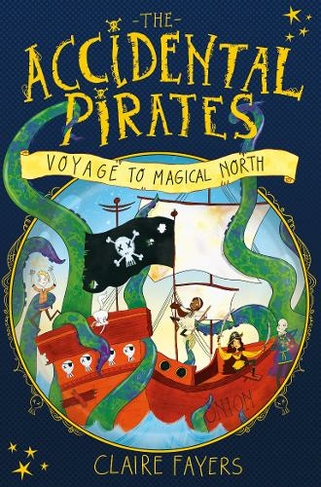 Take to the high seas in Voyage to Magical North, a swashbuckling pirate adventure filled with magic by Claire Fayers. Twelve-year-old Brine Seaborne is a girl with a past . . . if only she could remember what it is. Found alone in a rowboat as a child, clutching a shard of the rare starshell needed for spell-casting, she's spent every day since housekeeping for an irritable magician and his obnoxious apprentice, Peter. But everything changes when Brine and Peter accidentally break the magician's starshell and need to flee the island. Lost at sea, they blunder into the path of the legendary pirate ship the Onion. Before you can say 'pieces of eight,' they're up to their necks in the pirates' quest to find Magical North, a place so shrouded in secrets and myth that most people don't even think it exists. If Brine is lucky, she may find out who her parents are and why they sent her out to sea. And if she's unlucky, everyone on the ship will be eaten by sea monsters. It really could go either way. Enjoy more fun adventures with The Accidental Pirates in Journey to Dragon Island.

Claire Fayers was born and brought up in South Wales, an area of the country sadly deficient in dragons. Having studied English at Canterbury University, she built a successful career writing short stories for women's magazines until the lure of magic became too much and she wrote The Accidental Pirates: Voyage to Magical North which was selected as Waterstones Book of the Month, shortlisted for the Children's Book Award and won Book of the Year in the 2017 Beano Awards.When she's not writing, you'll find Claire at her allotment. She has produced some magnificent onions but her dream of growing a straight carrot still eludes her.