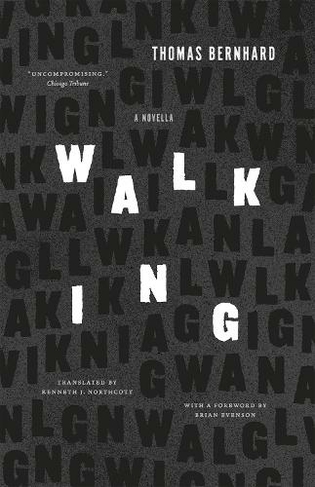 Also available on eBook for £9.11. Click here to purchase from Rakuten Kobo

Thomas Bernhard is "one of the masters of contemporary European fiction" (George Steiner); "one of the century's most gifted writers" (Newsday); "a virtuoso of rancor and rage" (Bookforum). And although he is favorably compared with Franz Kafka, Samuel Beckett, and Robert Musil, it is only in recent years that he has gained a devoted cult following in America. A powerful, compact novella, Walking provides a perfect introduction to the absurd, dark, and uncommonly comic world of Bernhard, showing a preoccupation with themes-illness and madness, isolation, tragic friendships-that would obsess Bernhard throughout his career. Walking records the conversations of the unnamed narrator and his friend Oehler while they walk, discussing anything that comes to mind but always circling back to their mutual friend Karrer, who has gone irrevocably mad. Perhaps the most overtly philosophical work in Bernhard's highly philosophical oeuvre, Walking provides a penetrating meditation on the impossibility of truly thinking.

Thomas Bernhard (1931-89) grew up in Salzburg and Vienna, where he studied music. In 1957 he began a second career as a playwright, poet, and novelist. He went on to win many of the most prestigious literary prizes of Europe (including the Austrian State Prize, the Bremen and Bruchner prizes, and Le Prix Seguier), became one of the most widely admired writers of his generation, and insisted at his death that none of his works be published in Austria for seventy years, a provision later repealed by his half-brother. Kenneth J. Northcott is professor emeritus of German at the University of Chicago. He has translated a number of books for the University of Chicago Press.