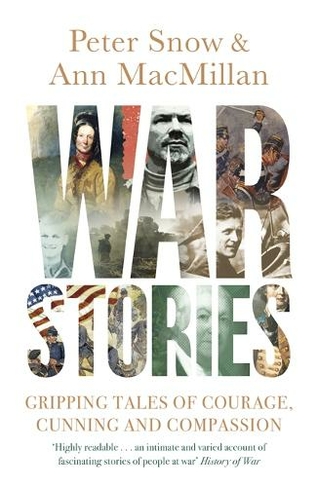 'Highly readable . . . an intimate and varied account of fascinating stories of people at war' History of War War Stories is a fascinating account of ordinary men and women swept up in the turbulence of war. These are the stories - many untold until now - of thirty-four individuals who have pushed the boundaries of love, bravery, suffering and terror beyond the imaginable. They span three centuries and five continents. There is the courage of Edward Seager who survived the Charge of the Light Brigade; the cunning of Krystyna Skarbek, quick-thinking spy and saboteur during the Second World War; the skullduggery of Benedict Arnold, who switched sides in the American War of Independence and the compassion of Magdalene de Lancey who tenderly nursed her dying husband at Waterloo. Told with vivid narrative flair and full of unexpected insights, War Stories moves effortlessly from tales of spies, escapes and innovation to uplifting acts of humanity, celebrating men and women whose wartime experiences are beyond compare.

Peter Snow is a highly respected journalist, author and broadcaster. He was ITN's Diplomatic and Defence Correspondent from 1966 to 1979 and presented BBC's Newsnight from 1980 to 1997. An indispensable part of election nights, he has also covered military matters on and off the world's battlefields for forty years. He presented the BBC documentaries Battlefield Britain and The World's Greatest Twentieth Century Battlefields with his son Dan. He is the author of several books including To War with Wellington and When Britain Burned the White House. Ann MacMillan was born in Wales, the great granddaughter of David Lloyd George, and grew up in Canada where she worked for CHIN Radio, Global TV News and CTV News. She moved to London in 1976 when she married Peter Snow and worked for the Canadian Broadcasting Corporation until 2013. She was the CBC's managing editor in London for the last thirteen years of her career.