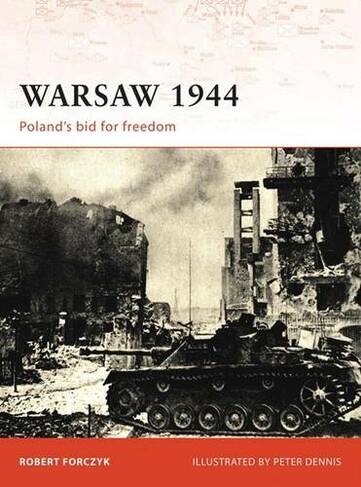 Defeated and occupied in 1939, Poland had suffered under the Nazi heel for nearly five years. Undaunted, however, the Poles formed an underground army, the Armia Krajowa (Home Army), and waited for a moment of German weakness. That moment seemed to have arrived in July 1944 as the Soviet armies began to advance into eastern Poland. The AK launched its revolt in Warsaw on 1 August 1944. Though its 5,000 fighters achieved some initial successes, the Germans were able to retain control over both the Vistula River bridges and the airbase, dooming the revolt to isolation and defeat. The SS was put in charge of suppressing the rebellion, beginning a wave of atrocities shocking even by Eastern Front standards. Illustrations (some col.)

Dr Robert A. Forczyk has a PhD in International Relations and National Security from the University of Maryland and a strong background in European and Asian military history. He is currently a lieutenant colonel in the US Army Reserves and has served 18 years as an armor officer in the US 2nd and 4th Infantry Divisions and as an intelligence officer in the 29th Infantry Division (Light).