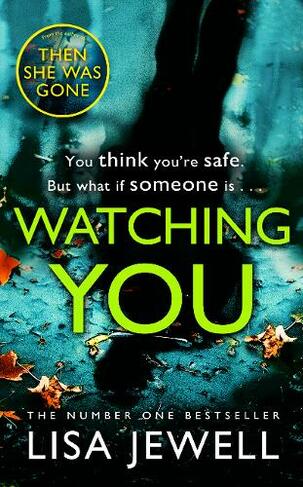 Watching You: From the number one bestselling author of The Family Upstairs

By Lisa Jewell (Author)
Paperback
Watching You: From the number one bestselling author of The Family Upstairs is rated 5.0 out of 5 by 1.
https://www.whsmith.co.uk/products/watching-you-brilliant-psychological-crime-from-the-author-of-then-she-was-gone/lisa-jewell/paperback/9781784756277-12-000.html £7.37 rrp £8.99 Save £1.62 (18%)
GBP
Availability
In Stock
Free Delivery Available When You Spend £25 Or More
Details
Spend £25 on eligible products to receive free standard delivery to home or free next working day click and collect to store
Share

YOU'RE NOT THE ONLY ONE WATCHING 'Page one intrigued me. Page three hooked me. By page five, I was consumed. This compulsive, propulsive novel is both a seize-you-by-the-throat thriller and a genuinely moving family drama. Stellar.' - A.J. Finn, author of The Woman in the Window _______________ You're back home after four years working abroad, new husband in tow. You're keen to find a place of your own. But for now you're crashing in your big brother's spare room. That's when you meet the man next door. He's the head teacher at the local school. Twice your age. Extraordinarily attractive. You find yourself watching him. All the time. But you never dreamed that your innocent crush might become a deadly obsession. Or that someone is watching you. _______________ Family secrets, illicit passion and an unexplained murder? It can only be the gripping new novel from Lisa Jewell, #1 bestselling author of Then She Was Gone. _______________ 'I was totally gripped by this excellent psychological thriller. Set in Bristol, it opens with a dead body, then moves into the head of Joey, a newly-married 27-year-old who gets a sudden crush on one of her new neighbours, which quickly becomes obsessive. Hugely enjoyable.' - Marian Keyes, author of The Break 'If you only pick one summer read this year, make it Watching You. I inhaled it in one sitting. A gripping plot, characters you love but can't trust, and a thumping emotional heart, Lisa Jewell has done it again.' - Sarah Pinborough, author of Behind Her Eyes and 13 Minutes 'If you loved The Woman in The Window and The Girl on the Train then this is for you!' - the Hotlist, U Magazine 'Then She Was Gone was my favourite thriller last year and this is even better. Brilliantly plotted and impossible to put down, it kept me guessing until the very end.' - Alice Feeney, author of Sometimes I Lie 'She's done it again! Lisa Jewell has penned the page-turner of the summer. Emotionally-engrossing and utterly compelling, with a mystery that keeps you gripped until the last heart-wrenching page.' - Tammy Cohen, author of They All Fall Down 'Jewell writes wonderfully engaging characters who weave plausibly tangled webs and the whodunit was largely incidental until the closing pages. She masterfully draws all her threads together, throwing in some cunning twists for good measure...The countdown is on for the next Lisa Jewell novel.' - Daily Express 'A finely drawn domestic thriller.' - India Knight

Rated 5 out of 5 by Reviewerlady from Excellent First-lass Read! Ooooh, this is soooo good! From first to last, I've been riveted . . . Joey Mullen returns home after working in sunnier climes for several years, bringing her brand new husband. With no home of their own yet, Joey's brother Jack insists they come to stay with him and his wife in their beautiful home in an upmarket suburb of Bristol. As Joey becomes drawn to a neighbour and begins to keep an eye on him, it transpires that she's not the only one doing some secret spotting. Who else is Watching You? This is a packed read! Beginning with the discovery of a body, we then go back in time to discover what led up to this death. There are several stories intertwined and cleverly woven together and not a minute wasted! I did work out the guilty party - only just ahead of the identity being revealed in the book - but I didn't fully get to grips with the whys and wherefores. There are lots of possibilities in this beautifully written novel; several suspects and I didn't really slot it all into place until the very final page which left me with a definite chill creeping up my spine! An excellent, first class read and one I cannot recommend highly enough. I'm thrilled and delighted to have another by this author in my tbr list, and I'm now desperate to get to it! A solid five golden stars and a highly recommended from me!

Lisa Jewell was born in London. Her first novel, Ralph's Party, was the bestselling debut novel of 1999. Since then she has published another sixteen novels, most recently a number of dark psychological thrillers, including The Girls and Then She Was Gone (both of which were Richard & Judy Book Club picks) as well as I Found You and Watching You. Lisa is a top ten New York Times and number one Sunday Times bestselling author who has been published worldwide in over twenty-five languages. She lives in north London with her husband, two daughters, two cats, two guinea pigs and the best dog in the world.