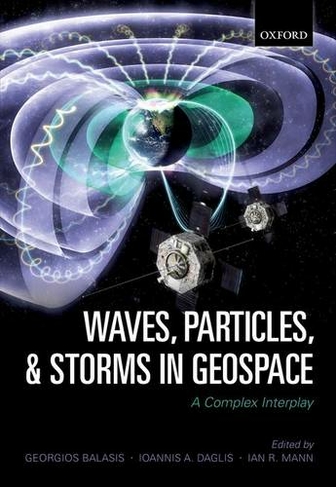 Waves, Particles, and Storms in Geospace: A Complex Interplay

Geospace features highly dynamic populations of charged particles with a wide range of energies from thermal to ultra-relativistic. Influenced by magnetic and electric fields in the terrestrial magnetosphere driven by solar wind forcing, changes in the numbers and energies of these particles lead to a variety of space weather phenomena, some of which are detrimental to space infrastructure. This book presents an overview of the latest discoveries and current scientific understanding of the coupling of electromagnetic waves and charged particles during magnetic storms, and explains the observed dynamics of these particle populations. The book furthermore includes investigations relevant to understanding and forecasting this space environment and the adverse impacts of space weather. High-energy electrons and ions in the Van Allen radiation belts and the ring current are of particular interest and importance with regard to the operation of space-based technological infrastructure upon which 21st century civilisation increasingly relies. This book presents the latest research on the sources, transport, acceleration and loss of these energetic particle populations, as well as their coupling during geospace magnetic storms. 157

Georgios Balasis is a senior researcher of the Institute for Astronomy, Astrophysics, Space Applications and Remote Sensing (IAASARS) at the National Observatory of Athens (NOA), Greece. He received a BSc in Physics from the of University of Athens (Greece), followed by an MSc in Geophysics from the University of Edinburgh (UK), an MSc in Condensed Matter Physics and a PhD in Applied Electromagnetism both from the University of Athens. From 2002 to 2006 he was thespecialist for global electromagnetic induction in the CHAMP satellite team at GeoForschungsZentrum Potsdam (Germany). Dr. Balasis continues to be involved in magnetic satellite missions, in particular as member of the Validation Team of the Swarm satellite mission of the European Space Agency (ESA)and principal investigator of the Swarm Mission Science Exploration. His primary interest lies in Space Physics, with a focus on the dynamics of the magnetosphere and space weather forecasting.Ioannis A. Daglis is a professor in the Department of Physics at the National and Kapodistrian University of Athens, Greece. Before his appointment at the University of Athens, he was the Director of the Institute for Space Applications and Remote Sensing for six years (2006-2012) and the Director of the Institute for Astronomy, Astrophysics, Space Applications and Remote Sensing for one year (2012-2013). His scientific expertise pertains to solar system astrophysics and space applications.Prof. Daglis graduated from the Physics Department of the Aristotle University of Thessaloniki. He worked on his PhD in Space Plasma Electrodynamics at the Max Planck Institute for Solar System Research (Germany) and the Johns Hopkins University Applied Physics Laboratory (USA) under the supervision ofthe late Prof. Sir W. Ian Axford.Ian R. Mann is a professor in the Department of Physics at the University of Alberta, Canada, and was a Canada Research Chair in Space Physics from 2003-13. His research specialises in the study of the impacts of the sun on near-Earth space, including being an expert in the study of ultra-low frequency plasma waves and their impacts on energetic particle dynamics, including on the radiation belts, ring current, as well as and energy transport in the coupled geospace system and in relation tothe generation of the aurora. He obtained his PhD in Applied Mathematics from the University of St. Andrews U.K., following receipt of a degree in Physics with Astrophysics from the University of Birmingham, U.K. He worked as a post-doctoral researcher at the University of London, U.K., and theUniversity of Alberta, Canada, and was awarded a UK NSERC Post-Doctoral Fellowship. He worked as a Lecturer at the University of York, U.K. from before joining the faculty at the University of Alberta, Canada.