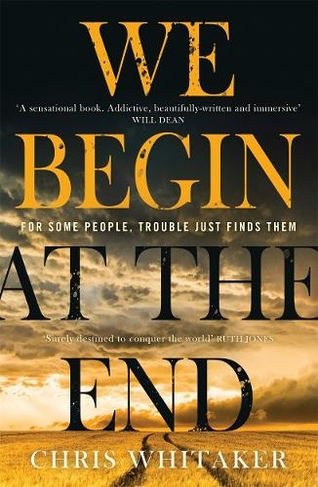 We Begin at the End: 'A beautifully written mystery, packed with unforgettable characters' Jane Harper

By Chris Whitaker (Author)
Hardback
We Begin at the End: 'A beautifully written mystery, packed with unforgettable characters' Jane Harper is rated 3.5 out of 5 by 2.
https://www.whsmith.co.uk/products/we-begin-at-the-end-gripping-heartbreaking-unforgettable-discover-the-most-captivating-crime-read-of/chris-whitaker/hardback/9781785769627-12-000.html £11.99 rrp £14.99 Save £3.00 (20%)
GBP
Availability
In Stock
Free Delivery Available When You Spend £25 Or More
Details
Spend £25 On Eligible Products To Recieve Free Standard Delivery To You Home Or Free Next Working Day Click And Collect To Store
Share

'A beautifully written mystery, packed with unforgettable characters' JANE HARPER 'Surely destined to conquer the world . . . Astonishingly good' RUTH JONES 'An accomplished and moving story of crime, punishment, love and redemption' GUARDIAN 'So beautifully written . . . will remain with you for a long time' LYNDA LA PLANTE 'Contender for thriller of the year' JON COATES, SUNDAY EXPRESS ___________________________________ With the staggering intensity of James Lee Burke and the absorbing narrative of Jane Harper's The Dry, We Begin at the End is a powerful novel about absolute love and the lengths we will go to keep our family safe. This is a story about good and evil and how life is lived somewhere in between. 'You can't save someone that doesn't want to be saved . . .' Thirty years ago, Vincent King became a killer. Now, he's been released from prison and is back in his hometown of Cape Haven, California. Not everyone is pleased to see him. Like Star Radley, his ex-girlfriend, and sister of the girl he killed. Duchess Radley, Star's thirteen-year-old daughter, is part-carer, part-protector to her younger brother, Robin - and to her deeply troubled mother. But in trying to protect Star, Duchess inadvertently sets off a chain of events that will have tragic consequences not only for her family, but also the whole town. Murder, revenge, retribution. How far can we run from the past when the past seems doomed to repeat itself? 'A magnificent crime novel. It deserves to win a hatful of awards. A BIG hat. Consider me a major fan' MARK BILLINGHAM 'Magnificent . . . an instant classic, a West Coast Where the Crawdads Sing . . . a special, vital novel. I'm grateful to have read it' A J FINN 'I LOVED this book . . . This is a book to be read and re-read and an author to be celebrated' LOUISE PENNY 'This one has it all . . . an absolute delight from first page to last' JOHN HART 'One of the best books I've ever read' FIONA CUMMINS 'An absolute masterclass in crime writing and story-telling' JO SPAIN 'Writing that is Booker Prize good' DEBORAH O'CONNOR 'One of the year's best crime reads' VASEEM KHAN

Rated 2 out of 5 by Anonymous from A bit too slow for me.... Chris Whitaker’s latest novel “We Begin at the End” is his third novel, following his successes with “All the Wicked Girls” and “Tall Oaks”. This time his thriller is set in a small town called Cape Haven in California and features a rich, atmospheric narration and a deep, character driven theme. Blurb - Thirty years ago, Vincent King became a killer. Now, he's been released from prison and is back in his hometown of Cape Haven. Not everyone is pleased to see him. Like Star Radley, his ex-girlfriend, and sister of the girl he killed. Duchess Radley, Star's thirteen-year-old daughter, is part-carer, part-protector to her younger brother, Robin - and to her deeply troubled mother. But in trying to protect Star, Duchess inadvertently sets off a chain of events that will have tragic consequences not only for her family but also the whole town. Foul mouthed, blunt and not frightened to offend, ‘outlaw’ Duchess Day Radley is arguably hard to like but as a mother myself, I totally endeared to her and truly felt her pain. Being a surrogate mother to her young brother and looking after her often drunk/drugged up mother must have been so hard for her and considering her young age herself did amazing well to make sure her brother was suitably cared for. The character that intrigued , me the most was Vincent King and I felt there could have been a bit more focus on him and his direct emotions. Although this book is exceedingly descriptive which added to the already intense atmospheric location, it was perhaps a little too much for me and I found it dipped in places which caused my interest to wane. The plot is revealed very slowly which may not be to every readers liking and the twist in the tail is guessable if you can work out the logistics of it. A suitable ending created a well thought out denouement and conclusion to this interesting and emotional slow burn thriller, featuring fractured relationships, broken characters, love, loss and redemption. 2.5 stars purely due to the immense slowness of it.
Rated 5 out of 5 by The Mushroom Forest from A Non-Scary Stephen King 30 years ago, Vincent King went to prison for the murder of little Sissy Radley. Vincent’s childhood best friend Walk has been counting the days to his release, but not everyone in Cape Haven is so sure about seeing him again. Star Radley, the sister of the girl who died, has had a messy and tragic life, raising two children on her own while battling her own bad judgement and addiction. Duchess Radley is far older than her 13 years, raising herself and her brother Robin while doing her best to protect her family from shame and ruin. Cape Haven is changing rapidly, with real estate being bought up and the old family homes being taken down by the mysterious and threatening figure of Dickie Darke. All Walk wants is for things to go back to how they were when the town was younger, but you can never go back to before. There’s no two ways about it, something about this book is just gripping. In many ways, We Begin At The End is a simple story of everyday people and circumstances. Bad things happen, people hurt each other and themselves and that pain has a rippling effect that touches everyone around. The story of Cape Haven and it’s residents though, has that something more, an unidentifiable draw of pure humanity. The setting and characters are written with masterful care and emotion, and I somehow feel that Cape Haven could have been written by Stephen King when he was in a less sinister mood – it has his ease and familiarity, that sense that you have been there before. I have a soft spot for both Walk; the overly caring one who needs others to be happy and safe more than he needs comfort and security himself, and for Duchess; the scarred and broken little girl who has to put everything she has into caring for her little brother whilst reserving the right to be as loud and bitter as she likes. I love her even when her F-you attitude gets her into trouble and stops her from enjoying the genuine opportunities that come her way. The way she is so guarded that she can’t accept that someone may actually not only want to help her and her brother, but also be ready to take the time to do it. There is something so real about her, so vulnerable underneath her fiercely protective shell. There is a tone of reminiscent childhood glow to this whole story, which makes me want to cry and laugh at the same time. It puts me in the mind of classics like To Kill a Mockingbird and Tuck Everlasting, those sticky summer stories in small towns with beautiful and curious children. I definitely look forward to reading more books by this author; I love his poetic descriptions and unusual sentence structures. I would definitely recommend this book to a wide variety of people. It’s a great murder mystery, but also pure drama. The small town element will appeal to a lot of people, and if you love Stephen King’s scene setting but want a change of pace, I would wholeheartedly recommend We Begin at the End.

Chris Whitaker is the award-winning author of Tall Oaks and All The Wicked Girls. Both books were published to widespread critical acclaim, with Tall Oaks going on to win the CWA John Creasey New Blood Dagger Award. Chris lives in Hertfordshire with his family. Follow Chris on Twitter @WhittyAuthor