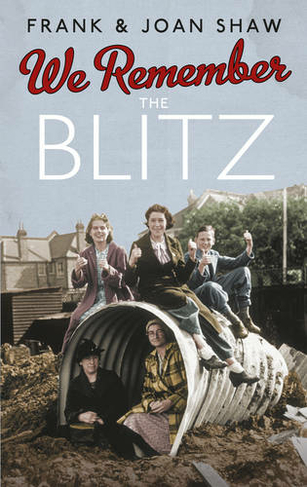 We Remember the Blitz

'I went to the public baths and after I undressed I could hear someone whistling. I looked round to see if I could see anybody about, but I couldn't, so I got into the bath and lay back to relax. As soon as I did, of course, I looked up and saw a man putting in the glass windows that had been blown out the night before.' Joan Adams, Lichfield On the night of 7 September 1940, bombs rained down on the defenceless and unprepared population of London for nine long hours. In November, raids spread to the rest of the country - starting in Coventry and taking in everywhere from Portsmouth, Cardiff, Belfast and Hull. During the nine months of the Blitz, thousands of people were killed and injured, and thousands of buildings and homes destroyed. But, with stoicism and humour, life went on. We Remember the Blitz is packed with vivid recollections from this important time in British history. Waking up in a damp shelter to the sound of bombing. Coming out of a cinema to discover that fires made night as bright as day. And, worst of all, the shock of seeing individuals and whole families killed in an instant. We hear from many who were there to pick up the pieces: ARP wardens, firemen - even the bakers, who would return to work under tarpaulin to ensure their neighbours had their daily loaf. Filled with moving but often funny memories, We Remember the Blitz is a celebration of the British spirit, and clearly shows that the battle for Britain was won by 'the many'. b/w photos t'out

Frank and Joan Shaw live in Hinckley in Leicestershire. They have four children and nine grandchildren. They were born and raised in Deal, Kent and this is where they spent the war. The idea of the We Remember series came when their granddaughter asked them about the Second World War for a school project. Frank and Joan decided more memories needed to be committed to paper, and they wrote to 700 local newspapers throughout the country asking just that. They were flooded with letters, which they then self-published as five hardback books, raising over GBP100,000 for the Royal British Legion. Ebury Press are excited to be republishing them over 20 years later, with all royalties also going to the Legion.