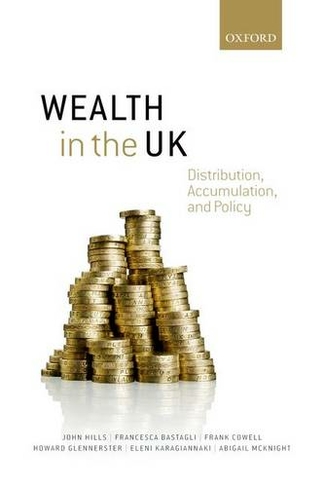 This book examines key issues connected with the distribution of personal wealth in the UK. It studies why wealth is now such an important factor in social differences and public policy. It presents the most recent information on current wealth inequalities and a detailed discussion of trends in the distribution of wealth. It uses newly available data to compare wealth inequalities in the UK with the USA, Canada, and Sweden. It uses longitudinal data, which track the same people over time, to examine trajectories in wealth accumulation over the decade to 2005 and inequalities in inheritances over the same period. It looks at how parental wealth levels and people's asset-holdings early in adulthood affect outcomes later in their lives. The final part looks at the way in which policies towards wealth-holding developed historically, and the contradictory ways in which a wide range of public policies relate to people's wealth levels, including through taxation, means-testing, and the encouragement of saving, and discusses what the key issues for policy towards wealth and wealth inequalities now are. Personal wealth in the UK totalled GBP5.5 trillion by 2010 (GBP9-10 trillion if occupational pension rights are included). Inheritance flows are now equivalent to 4 per cent of national income each year. All households in the wealthiest tenth have more than 75 times the wealth of any of those in the bottom tenth. Absolute differences in wealth levels have increased substantially over the last 15 years, so wealth differences represent many more years of income than in the past. This makes them of great importance to life chances. This makes the book highly relevant for public policy, but also for academic and student understanding of a crucial dimension of social difference. As well as bringing together existing information on the area, the book contains considerable new analysis on wealth inequality, inheritance, and their impacts, drawing on work which is at the forefront of recent research. Figures and Tables

John Hills is Professor of Social Policy and Director of the Centre for Analysis of Social Exclusion (CASE) at the London School of Economics. His research interests include income distribution and the welfare state, social security, housing and taxation. He led an independent review of the measurement of fuel poverty for the Department of Energy and Climate Change that reported in March 2012. He was also Chair of the National Equality Panel (2008-2010), carried outa review of the aims of social housing for the Secretary of State for Communities in 2006-07 and was one of the three members of the UK Pensions Commission from 2003 to 2006. He was Co-Director of the LSE's Welfare State Programme (1988-1997), and Senior Adviser to the Commission of Inquiry intoTaxation, Zimbabwe (1984-86). He worked at the Institute for Fiscal Studies (1982-84), for the House of Commons Select Committee on the Treasury (1980-82), and at the Department of the Environment (1979-80).Francesca Bastagli is Research Fellow at the Centre for Analysis of Social Exclusion, London School of Economics. Her research focusses on poverty and inequality, public policy evaluation, and international comparative social policy.Frank Cowell is Professor of Economics, London School of Economics and Director of the Public Economics Programme, STICERD. He is editor of Economica and Associate Editor of the Journal of Economic Inequality. His research interests include income and wealth distribution, inequality and poverty, and issues in taxation. His work has appeared in several leading journals and his publications include The Economics of Poverty and Inequality (Edward Elgar, 2006), Microeconomics: Principles andAnalysis (OUP, 2008), and Measuring Inequality, 3e (OUP, 2011).Howard Glennerster is Emeritus Professor of Social Policy at the LSE and an associate member of CASE. Over 40 years, he has written widely on public expenditure and public finance in the social policy field especially. He was a contributing author to the first edition of 'The State of Welfare: The Economics of Social Spending' (OUP,1990) and co-editor of, and contributor to, the second edition (1998). He is co-author with John Hills and Tony Travers of' Paying for Health Education and Housing'(OUP, 2000), author of 'British Social Policy: 1945 to the Present' (Blackwells, 2007), and of 'Understanding the Finance of Welfare' published (Policy Press, 2e, 2008).Eleni Karagiannaki is Research Officer at the Centre for Analysis of Social Exclusion, LSE.Abigail McKnight is Senior Research Fellow at the Centre for Analysis of Social Exclusion, London School of Economics. Dr McKnight's research interests include low wage employment and labour market inequality, the distribution of wealth, asset-based welfare, evaluation of active labour market programmes, social mobility, and the economics of education.