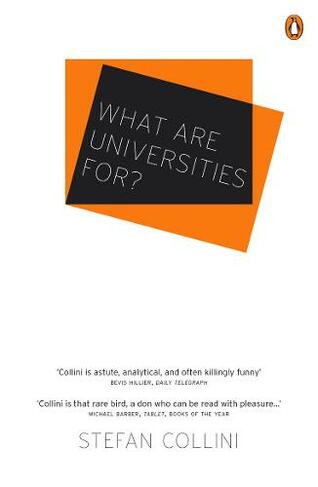 What are Universities For?

Across the world, universities are more numerous than they have ever been, yet at the same time there is unprecedented confusion about their purpose and scepticism about their value. What Are Universities For? offers a spirited and compelling argument for completely rethinking the way we see our universities, and why we need them. Stefan Collini challenges the common claim that universities need to show that they help to make money in order to justify getting more money. Instead, he argues that we must reflect on the different types of institution and the distinctive roles they play. In particular we must recognize that attempting to extend human understanding, which is at the heart of disciplined intellectual enquiry, can never be wholly harnessed to immediate social purposes - particularly in the case of the humanities, which both attract and puzzle many people and are therefore the most difficult subjects to justify. At a time when the future of higher education lies in the balance, What Are Universities For? offers all of us a better, deeper and more enlightened understanding of why universities matter, to everyone.

Stefan Collini has become one of the most respected voices in public debates about universities and their place in modern society.He is a Professor of Intellectual History and English Literature at Cambridge University and Fellow of the British Academy, who frequently contributes to The Guardian,The London Review of Books,The Times Literary Supplement and The Nation.Reviewers of the recent, Common Reading: Critics, Historians,Publics (2008), described him as 'one of Britain's finest essaysists and writers.'Other works include Absent Minds: Intellectuals in Britain (2006),Public Moralists (1991),Matthew Arnold: a Critical Portrait (1994) and English Pasts: Essays in History and Culture (1999).