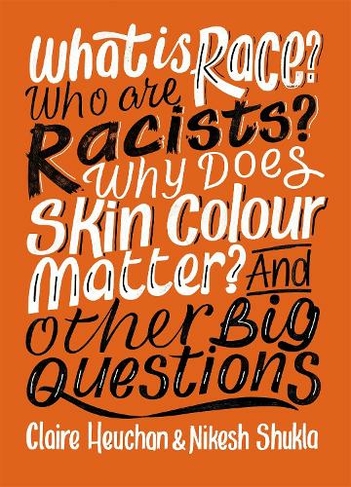 By Nikesh Shukla (Author), Claire Heuchan (Author)
Paperback
£9.19 rrp £9.99 Save £0.80 (8%)
GBP
Availability
In Stock
Free Delivery Available When You Spend £15 Or More
Details
Spend £15 On Products To Receive Free Standard Delivery To Your Home Or Free Next Day Click and Collect To Stores

An important and timely book on race and racism, encouraging children to think for themselves about the issues involved. Talk about race is often discouraged, but this book aims to bring everyone into the conversation. It explores the history of race and society, giving context to how racist attitudes come into being. It looks at belonging and identity, the damaging effects of stereotyping and the benefits of positive representation. The authors talk sensitively about how to identify and challenge racism, and how to protect against and stop racist behaviour. Aimed at young people aged 10 and upwards. Part of the groundbreaking and important 'And Other Big Questions' series, which offers balanced and considered views on the big issues we face in the world we live in today. Other titles in the 'And Other Big Questions' series include: What is Humanism? How do you live without a god? What is Feminism? Why do we need it? Who are Refugees and Migrants? What makes people leave their homes? What is Consent? Why is it important? What is Right and Wrong? Who Decides? Where do values come from? What is Masculinity? Why does it matter? What is Mental Health? Where does it come from? What is Politics? Why should we care?

Nikesh Shukla (Author) Nikesh Shukla is the editor of British Book Award-shortlisted anthology The Good Immigrant, a collection of essays by British writers of colour about race and immigration in the UK. His debut novel, Coconut Unlimited, was shortlisted for the Costa First Novel Award and his debut YA novel, Run, Riot, was shortlisted for the Specsavers National Book Award. Nikesh has written for The Guardian, Observer, Independent, Esquire, Buzzfeed, Vice and BBC2 and BBC Radio 4. Nikesh was one of Foreign Policy magazine's 100 Global Thinkers and The Bookseller's 100 most influential people in publishing in 2016 and in 2017. He is the co-founder of the literary journal, The Good Journal and The Good Literary Agency. Claire Heuchan (Author) Claire Heuchan is an award-winning black feminist writer who blogs under the name Sister Outrider. She writes on subjects including race, power, identity and sexual politics and her work has been featured in several publications including 404 Ink's Nasty Women.