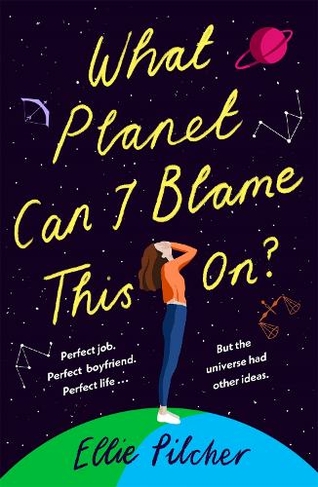 What Planet Can I Blame This On?

The stars are not in position - and Krystal Baker is determined to make them fall in line. It's Krystal's 29th birthday. This year: * Her boyfriend finally proposed after six years of dating (only for her to find out he cheated on her for five and a half of them) * She landed her dream job as a writer at Craze magazine (which swiftly fell into administration) * She moved into her dream flat overlooking the city (just for the pipes to explode making the place unliveable) As she mourns everything wrong in her life, her best friend mutters the dreaded words: Saturn Return. The time in a woman's life where Saturn returns to the position it was in on the day of their birth, 29.5 years ago, and, according to legend, everything goes to shit. Krystal has never bought into astrology but maybe it's time to re-evaluate - because if the stars got her into this mess, they can get her out of it. And she only has six months to make things right. Loaded with crystals, horoscopes, tarot cards and a carefully aligned chakra or two, Krystal's determined to have her life back on track by the time Saturn returns. No longer shall she brand herself a 'human disaster' because this time it's not her fault, it's written in the treacherous stars. It's Krystal versus the universe in a fight for her future that she's determined to win.

Ellie Pilcher is a writer based in South London. She works in book publishing and is a freelance journalist regularly featured on BBC Radio 5 Live, The Telegraph, Huffington Post and many others. She also runs a Careers, Books and Lifestyle blog called EllesBellesNotebook, and is a public speaker on topics including social media, zero waste lifestyle and career growth.