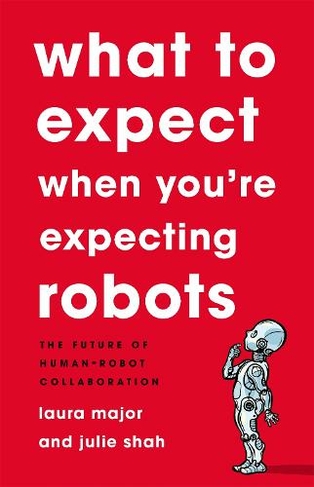 What To Expect When You're Expecting Robots: The Future of Human-Robot Collaboration

For however smart your Roomba or Alexa might seem, historically, robots have been fairly dumb. They are only able to do their jobs when given a narrow set of tasks, confined in a controlled environment, and overseen by a human operator. But things are changing. A new breed of robots is in development that will operate largely on their own. They'll drive on roads and sidewalks, ferry deliveries within buildings, stock shelves in stores, and coordinate teams of doctors and nurses. These autonomous systems will find their way into busy, often unpredictable public spaces. They could be truly collaborative, augmenting human work by attending to the parts of tasks we don't do as well, without our having to stop and direct them. But consider, for a moment, the sorcerer's apprentice. The broom he set to work was also supposed to be collaborative, too, and should have made his life much easier. But the broom didn't know how to behave, and the apprentice no longer understood the thing he had made. The challenge of this next generation of robots is that, like the apprentice's broom, they will wreak complete havoc, inadvertently hurting or even killing people, unless we can recognize a simple truth: collaborative robots will be the first truly social creatures that technology has created. They will need to know how to behave in unfamiliar spaces and around untrained users and bystanders. Robot experts Julie Shah and Laura Major are among those engineers leading the development of collaborative robots, and in this book, they will offer their vision for how to make it in the new era of human-robot collaboration. They set out the blueprint for what they call working robots, which in many ways resemble service animals, and take readers through the many fascinating and surprising challenges that both engineers and the public will need to address in figuring out these machines can be responsibly integrated into society: what they will have to look like, how they will have to talk to strangers and what robot etiquette will be, whether we will have to "robot-proof" public spaces and infrastructure, and how the safety-critical work of human-robot collaboration will force a sea change in how the tech industry is regulated. Today, we still gawk at a car that drives by without a driver. Tomorrow, you might find yourself driving next to five of them. We can debate whether the singularity will ever come, but robots need not be superintelligent in order to revolutionize our relationship to technology. Read this book to find out how. 22 Illustrations, black & white

Laura Major is the CTO of autonomous mobility at Motional. Previously, she led the development of autonomous aerial vehicles at CyPhy Works and a division at Draper Laboratory. Major has been recognized as a national Society of Women Engineers Emerging Leader. She lives in Cambridge, Massachusetts.Julie Shah is a roboticist at MIT and an associate dean of social implications and responsibilities of computing. She directs the Interactive Robotics Group in the Schwarzman College of Computing at MIT. She was a Radcliffe fellow, has received an National Science Foundation Career Award, and has been named one of MIT Technology Review's "Innovators Under 35." She lives in Cambridge, Massachusetts.