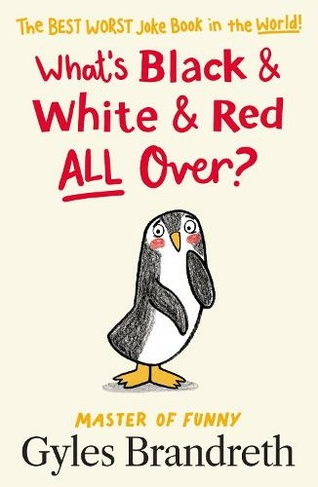 What's Black and White and Red All Over?

By Gyles Brandreth (Author)
Hardback
https://www.whsmith.co.uk/products/whats-black-and-white-and-red-all-over/gyles-brandreth/hardback/9780241427293-12-000.html £8.19 rrp £9.99 Save £1.80 (18%)
GBP
Availability
In Stock
Free Delivery Available When You Spend £25 Or More
Details
Spend £25 On Products To Receive Free Standard Delivery To Your Home Or Free Next Working Day Click And Collect To Store
Share

*Laugh yourself silly in this fantastic collection of jokes and riddles from master of funny Gyles Brandreth!* WHAT'S BLACK AND WHITE AND RED ALL OVER? An embarrassed Penguin A sunburnt elephant A newspaper! Did those jokes make you laugh? Make you groan? Maybe a bit of both? There's a lot more where they came from. Collected here by jokesmith Gyles Brandreth are some of the best and worst jokes ever (plus a few riddles to keep you on your toes). From 'Knock, knock' to 'Waiter waiter', with some funny elephants and giraffes thrown in for good measure, there's also a bit of expert joke advice, so you can show others just how funny you can be! 'Very funny, and often outright silly' Guardian on Have You Eaten Grandma by Gyles Brandreth

Gyles Daubeney Brandreth is an English theatre producer, actor, politician, journalist, author and TV presenter. Born in Germany, he moved to London at the age of three and, after his education at New College, Oxford, he began his career in television.He went from presenting Puzzle Party in the 1970s, to appearing in Countdown's Dictionary Corner for over 300 episodes. His career has since encompassed becoming an MP and appearing regularly on TV and radio, but writing is his true passion.His past books include; Word Play, Oxford Dictionary of Humorous Quotations and Breaking the Code: Westminster Diaries.