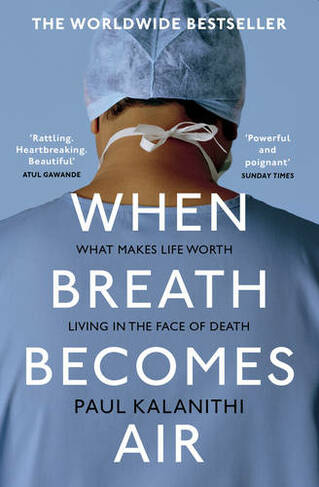 ** SUNDAY TIMES NUMBER ONE BESTSELLER** 'Rattling. Heartbreaking. Beautiful.' Atul Gawande, bestselling author of Being Mortal At the age of thirty-six, on the verge of completing a decade's training as a neurosurgeon, Paul Kalanithi was diagnosed with inoperable lung cancer. One day he was a doctor treating the dying, the next he was a patient struggling to live. When Breath Becomes Air chronicles Kalanithi's transformation from a medical student asking what makes a virtuous and meaningful life into a neurosurgeon working in the core of human identity - the brain - and finally into a patient and a new father. What makes life worth living in the face of death? What do you do when when life is catastrophically interrupted? What does it mean to have a child as your own life fades away? Paul Kalanithi died while working on this profoundly moving book, yet his words live on as a guide to us all. When Breath Becomes Air is a life-affirming reflection on facing our mortality and on the relationship between doctor and patient, from a gifted writer who became both. 'A vital book about dying. Awe-inspiring and exquisite. Obligatory reading for the living' Nigella Lawson

Paul Kalanithi was a neurosurgeon and writer. He held degrees in English literature, human biology, and history and philoso phy of science and medicine from Stanford and Cambridge universities before graduating from Yale School of Medicine. He also received the American Academy of Neu rological Surgery's highest award for research.His reflections on doctoring and illness have been published in the New York Times, the Washington Post and the Paris Review Daily. Kalanithi died in March 2015, aged 37. He is survived by his wife, Lucy, and their daughter, Elizabeth Acadia.