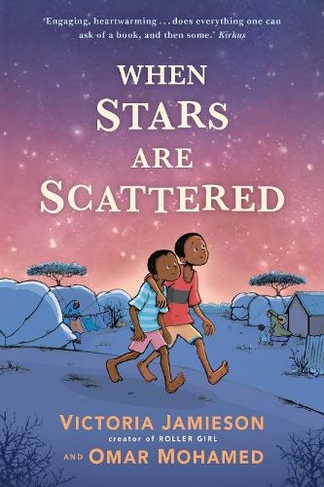 When Stars are Scattered: (Main)

A heart-wrenching true story about life in a Kenyan refugee camp that will restore your faith in real-life happy endings. Omar and his brother Hassan, two Somali boys, have spent a long time in the Dadaab refugee camp. Separated from their mother, they are looked after by a friendly stranger. Life in the camp isn't always easy. The hunger is constant . . . but there's football to look forward to, and now there's a chance Omar will get to go to school . . . With a heart-wrenching fairytale ending, this incredible true story is brought to life by Victoria's stunning illustrations. This book perfectly depicts life in a refugee camp for 8-12 year olds. 'Does everything one can ask of a book, and then some.' Kirkus 'Fantastic graphic novel.' The New York Times Book Review 'Sensitive and poignant.' School Library Journal 'Not to be missed.' Booklist

Victoria Jamieson is the creator of the graphic novels All's Faire in Middle School and Newbery Honor winner Roller Girl. She received her BFA in illustration from the Rhode Island School of Design and worked as a children's book designer before becoming a freelance illustrator. She has also worked as a portrait artist aboard a cruise ship, and has lived in Australia, Italy, and Canada. Now she lives in Pennsylvania with her husband and son.Omar Mohamed spent his childhood at the Dadaab camp, after his father was killed and he was separated from his mother in Somalia. He devoted everything to taking care of his younger brother, Hassan, and to pursuing his education. He now lives in Lancaster, Pennsylvania, with his wife and five children, and works at a center to help resettle other refugees. He is the founder of Refugee Strong, a non-profit organization that empowers students living in refugee camps. He still works with the Dadaab camp and travels back there once a year.Iman Geddy, the colourist for this book, is an Atlanta-based designer and illustrator who is passionate about using the graphic arts for social good. Inspired by the geometric harmony of Islamic architecture as well as the colourful equatorial landscapes of eastern Africa, she creates striking art that highlights the beauty of the world around us.