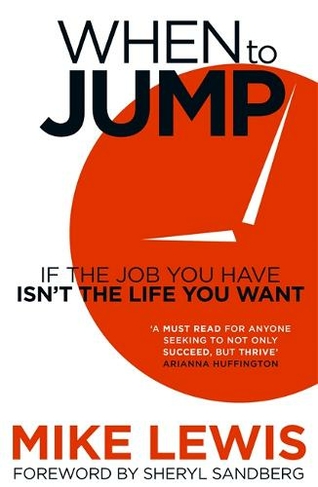 By Mike Lewis (Author)
Paperback
https://www.whsmith.co.uk/products/when-to-jump-if-the-job-you-have-isnt-the-life-you-want/mike-lewis/paperback/9781473653641-12-000.html £8.19 rrp £9.99 Save £1.80 (18%)
GBP
Availability
In Stock
Free Delivery Available When You Spend £15 Or More
Details
Spend £15 On Eligible Products To Recieve Free Standard Delivery To You Home Or Free Next Working Day Click And Collect To Store
Share

If you're at a crossroads, this is the book you need to read to begin chasing your dreams. Includes a foreword by Sheryl Sandberg. Do you have a little voice in your head telling you to pursue the thing you love? Leaving a comfortable job to pursue a passion is a brave, bold move - but it's far from impossible. In this inspiring read When to Jump founder Mike Lewis has curated a community of people to share their stories about taking the leap into the unknown - people from all walks of life who left the safe inertia of their own circumstances to try and do what they really wanted to be doing. These are empowering, compelling tales about taking risks and embracing fear. Forget what you should be doing, what do you want to be doing? What do you love doing? When to Jump will show you that starting something different is possible. Nothing will change unless you make the change - the journey starts here... Mike has recently been awarded the Goldman Sachs accolade '100 Most Intriguing Entrepreneurs'. "Whether you're burned out, in a rut, or just feel that you want something else, Mike Lewis's When to Jump is the book for you. With more than forty stories of people who decided to make a major change, this book offers the inspiration as well as a practical and simple framework to help you make your own jump. A must read for anyone seeking to not only succeed but thrive." - Arianna Huffington, #1 New York Times bestselling author of Thrive and The Sleep Revolution "A lively and inspiring guidebook for anyone who wants to make the jump from normal to extraordinary." - Tony Robbins, #1 New York Times bestselling author of Unshakeable and MONEY: Master the Game "The book that will change your life today." - The Sunday Times Style "A smart and sensitive take on how to make positive changes with confidence. It also serves up lessons on failure and dealing with the fear that stops us rerouting lives we aren't happy to be living. Most important, the book advises you not to ignore the little voice that keeps reminding you things are not the way you want them to be." - The Sunday Times Style "If you're thinking of taking a lifestyle leap, don't do anything till you've read the inspiring new book that will show you how." - The Sunday Times Style "Lewis has interviewed 44 'jumpers', who are rarely less than fascinating...a simple and powerful message: be brave. Everyone should have these words on their wall: you only get one life." - The Daily Mail "This inspiring book could be just the read you need to make your own dreams reality." - The Press Association 'The perfect guidebook for those who are only tentatively dipping their toe into the entrepreneurial world...an inspiring and useful read' - The Independent

Mike Lewis received his BA, magna cum laude, from Dartmouth College and worked at Bain Capital before deciding to pursue his dream of becoming a professional squash player. Mike is the Founder and CEO of When to Jump, a community featuring the ideas, stories, and people who have left certain paths to pursue entirely different ones. Launched in January 2016, the When to Jump platform has reached millions of impressions through digital media, brand collaborations, and in-person experiences. When to Jump, a tangible print collection of original stories from the community with clear guidance on how and when to jump, is his first book. Goldman Sachs named Mike one of the 100 most intriguing entrepreneurs in 2017. He lives in San Francisco.