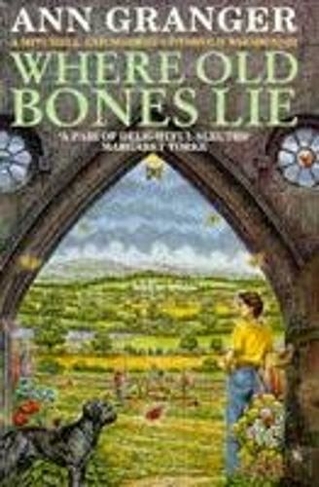 By Ann Granger (Author)
Paperback
https://www.whsmith.co.uk/products/where-old-bones-lie-mitchell-and-markby-5-a-cotswold-crime-novel-of-lo/ann-granger/paperback/9780747242970-12-000.html £7.37 rrp £8.99 Save £1.62 (18%)
GBP
Availability
Available / dispatched within 1 - 2 weeks
Free Delivery Available When You Spend £25 Or More
Details
Spend £25 On Products To Receive Free Standard Delivery To Your Home Or Free Next Working Day Click And Collect To Store

A tangle of conflicting clues, suspects and possible witnesses... Meredith Mitchell is involved in yet another murder case with Cotswold Chief Inspector Markby in Where Old Bones Lie, the fifth whodunit in Ann Granger's Mitchell & Markby series. The perfect read for fans of M.C. Beaton, Agatha Christie and ITV's Midsomer Murders. 'A tidy, inventive and intricate plot graced with lovely scenic descriptions' - Publishers Weekly What do you do when you think your ex-lover has murdered his wife? That's the question Ursula Gretton, an archeologist working on the Saxon burial ground on Bamford Hill, puts to Meredith Mitchell in the hope that Meredith's friendship with Cotswold Chief Inspector Markby might cast some light on her dilemma. But Markby is dismissive of Ursula's suspicions concerning the disappearance of Dan Woollard's wife - until a body is found in the rubbish dump near the site Woollard and Ursula have been excavating. Woollard's team of archeologists aren't the only ones to disturb the peace of the windswept hill. Much to the fury of a taciturn pair of local landowners, a band of New Age travellers has set up camp on the hill, only to disappear the day the body's discovered. Markby is faced with a tangle of conflicting clues, suspects and possible witnesses - amongst the latter Meredith Mitchell - and when a second body is found it is clear the web is growing even more complex, and destructive. What readers are saying about Where Old Bones Lie: 'Ann Granger peppers her stories with plenty of characters, twists and turns and motives, keeping the reader guessing as to who the actual killer could be' 'You'll hang on each and every page until you come to the amazing conclusion' 'A well written mystery with an interesting archaeological background and well-drawn characters'

Ann Granger has lived in cities all over the world, since for many years she worked for the Foreign Office and received postings to British embassies as far apart as Munich and Lusaka. She is now permanently based in Oxfordshire.