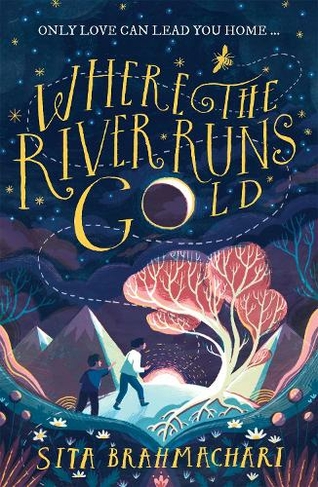 Where the River Runs Gold

Two children must risk everything to escape their fate and find the impossible . . . bold adventure, timely climate change themes and breathtaking writing, from award-winning author Sita Brahmachari. 'Lavishly written and full of love of the natural world.' - Sunday Times Shifa and her brother, Themba, live in Kairos City with their father, Nabil. The few live in luxury, whilst the millions like them crowd together in compounds, surviving on meagre rations and governed by Freedom Fields - the organisation that looks after you, as long as you opt in. The bees have long disappeared; instead children must labour on farms, pollinating crops by hand so that the nation can eat. The farm Shifa and Themba are sent to is hard and cruel. Themba won't survive there and Shifa comes up with a plan to break them out. But they have no idea where they are - their only guide is a map drawn from the ramblings of a stranger. The journey ahead is fraught with danger, but Shifa is strong and knows to listen to her instincts - to let love guide them home. The freedom of a nation depends on it . . .

Sita Brahmachari won the Waterstones Children's Book Prize with her debut Artichoke Hearts and is one of the most interesting and important voices in children's books today. Tender Earth was awarded an honour by the International Board of Books for Young People, and her most recent novel, Where The River Runs Gold, published to great acclaim in July 2019. Sita's books have been shortlisted for the UKLA Book Award, nominated for the CILIP Carnegie Medal, and have been translated into many languages around the world. She was the 2015 Booktrust's Writer in Residence and is the current Writer in Residence at Islington Centre for Refugees and Migrants. Sita is also an Amnesty International ambassador. She lives in London with her family.