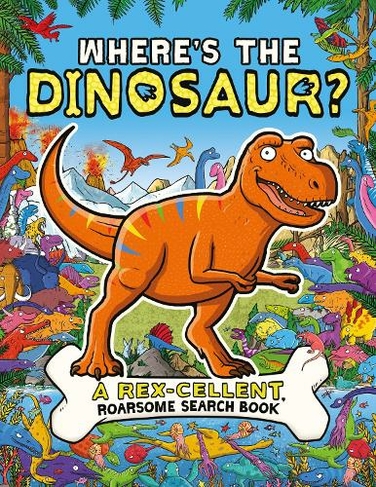 Where's the Dinosaur? is full of rex-cellent facts about the colossal prehistoric animals that populated the Earth millions of years ago, with dinosaurs and other creatures to search for and find in colourful search scenes. Roam a Jurassic forest to track a Diplodocus, dive deep into an ocean to hunt a Plesiosaurus and search high in the sky for a Pterodactylus. With over 130 colossal creatures to spot across 17 scenes and fun facts to discover throughout, this roarsome, clawsome search-and-find adventure is perfect for young dinosaur lovers. With bright, humorous cartoon illustrations from James Cottell and fascinating facts from dinosaur expert Dougal Dixon.

Helen Brown (Author) Helen Brown studied English at the University of Sussex, before becoming a writer and editor of children's books. She lives and works in London.James Cottell (Author) James graduated from Falmouth University with a BA (Hons) in Illustration in 2007. James creates his humorous, detailed cartoon illustrations using dip pen, ink, watercolour, pencils, elements of digital colour and a cheeky sense of humour. He has a real strength for observation, characterisation and a strong use of line. He loves illustrating animals, especially dinosaurs! Follow him on Instagram and Twitter @jamescottell.Dougal Dixon (Author) Dougal Dixon studied geology and paleogeography at the University of St Andrews. He is an award-winning author specialising in the earth sciences and evolution with many children's books and encyclopaedias to his name. He is an internationally recognized authority on dinosaurs and has worked as an editor, consultant and as a special advisor for programmes and motion pictures about dinosaurs in the United States, Great Britain and Japan. Dougal was one of the scientists featured on the Discovery Channel/BBC programme Natural History of an Alien, and he was also brought in as a consultant for the series The Future is Wild on the BBC, the Discovery Channel and Animal Planet.