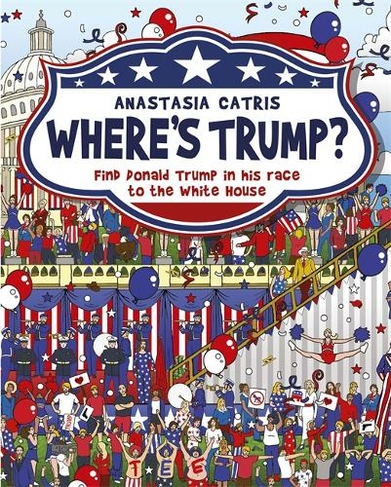 Where's Trump? Find Donald Trump in his race to the White House

By Anastasia Catris (Author)
Hardback
https://www.whsmith.co.uk/products/wheres-trump-find-donald-trump-in-his-race-to-the-white-house/anastasia-catris/hardback/9781409167730-12-000.html £6.55 rrp £7.99 Save £1.44 (18%)
GBP
Availability
In Stock
Free Delivery Available When You Spend £25 Or More
Details
Spend £25 on eligible products to receive free standard delivery to home or free next working day click and collect to store
Share

'Winners aren't losers!' Can you spot the Donald? In an array of crowded scenes, from building a wall around Mexico to carving his face into Mount Rushmore, at a Trump wrestling match, a golf course in Scotland and having fun at a Tea Party rally, search for Donald J. Trump amongst the masses. With tons of in-jokes and bonus material to find (including Obama's birth certificate and his trademark toupee), plus cameo appearances from Sarah Palin and other high-flying pals, this book provides hours of fun for the haters (and lovers) of the all-American phenomenon that is TRUMP. A classic and fun gift book, tracking Trump around the world will be endless amusement for all the family.

Anastasia Catris graduated from Royal Holloway, University of London with a BA Hons in English Literature and then travelled to the United States to pursue her passion for illustration by studying at The Kubert School of Comic and Cartoon Art. She returned to the UK in 2009, and has since worked as a freelance illustrator for HarperCollins, Kerrang!, Fox, Marvel, DC and Cygnus Alpha: The Doctor Who Fanzine. Ana lives in Wales, United Kingdom, and is an advocate of art therapy and of the calming power of colouring in. www.anastasiacatris.comInstagram: @AnastasiaCatris