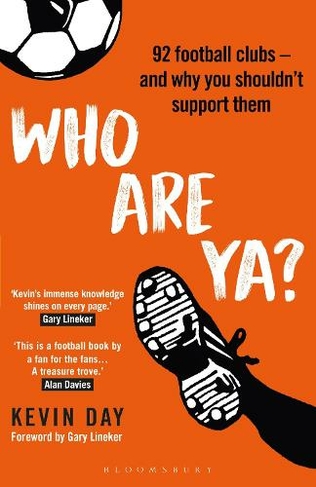 Who Are Ya?: 92 Football Clubs - and Why You Shouldn't Support Them

"Kevin's immense knowledge shines on every page." Gary Lineker "A football book by a fan for the fans. A treasure trove..." Alan Davies Written by comedian and former Match of the Day presenter Kevin Day, Who Are Ya? is a mix of comic football observation, friendly fan rivalry and quirky anecdote, featuring a foreword by Gary Lineker and a host of celebrity contributions. Partly autobiographical, partly polemical, but mostly funny, Who Are Ya? is a snapshot of modern football, exploring the history of all 92 English Football League clubs. During his time as a broadcaster, Kevin Day has spoken to thousands of football players, managers and most importantly fans from across the generations. He spent thousands of hours crossing the country on trains, planes, automobiles, coaches - and once a donkey called Lightning - watching football at all levels. This book is the result of that: a tale of being chased down a railway line at Cardiff, a story of meeting George Best, an account of a lady getting her first Hull City tattoo at the age of 80! Crisply funny and with a host of celebrity football fan contributors - including Stephen Fry, Jo Brand, Alfie Boe, Eddie Izzard, Gabby Logan, and Romesh Ranganathan - Who Are Ya? celebrates the joys and miseries of being a football supporter.

Kevin Day is an acclaimed stand-up comedian and one of the country's leading comedy writers. He writes for Have I Got News for You and A League of Their Own, regularly appears on TalkSport and BBC 5 Live, and is known to football fans for his supporter-focused reporting on Match of the Day 2. Kevin also presents a podcast called The Price of Football with football finance expert and academic Kieran Maguire. A Crystal Palace supporter, Kevin even held his wedding reception at Selhurst Park.