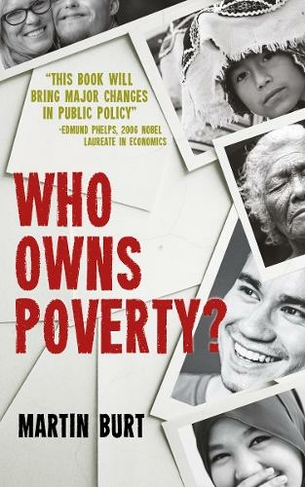 WHAT IF WE'VE BEEN ASKING ALL THE WRONG QUESTIONS ABOUT POVERTY? This is a story about a question we never thought to ask - who owns poverty? - and about an unexpected answer that challenges everything we thought we knew about what poverty is, and what we can do about it. This book is for the governments, development organizations and changemakers who are frustrated with simply trying to reduce poverty, or alleviate its effects-and the lack of progress we face in doing either. This is a book that celebrates the power of audacious questions and considers what happens when we put poverty back into the hands of the real experts: families living in poverty. 5 black and white illustrations

Dr. Martin Burt is Founder and Chief Executive Officer of Fundacion Paraguaya, a non-profit devoted to the promotion of social entrepreneurship and economic self-reliance to eliminate poverty around the world. He is a pioneer in applying new poverty metrics, microfinance, micro-franchise, youth entrepreneurship, financial literacy and financially self-sufficient agricultural technical vocational methodologies. Dr. Burt is currently a board member of the Schwab Foundation for Social Entrepreneurship at the World Economic Forum, the Global Foodbanking Network, and Teach A Man To Fish. He is Co-Founder of the Bertoni Environmental Foundation, Asociacion Paraguaya de la Calidad, Paraguay Educa, Club Universitario de Rugby de Asuncion, Sistema B Paraguay, and the Mbaracayu Forest Foundation. In public service, he has served as Chief of Staff to the President of Paraguay, was elected Mayor of Asuncion, and appointed Vice Minister of Commerce. Dr. Burt has written books on economics, development, municipal government, poetry and education. He has received awards from organizations including Avina Foundation, Skoll Foundation, Schwab Foundation, Synergos, the Eisenhower Fellowship, the Inter-American Development Bank, the World Innovation Summit for Education, and Nestle. He is a graduate of the University of the Pacific and George Washington University. He holds a PhD from Tulane University, and is a Visiting Professor of Social Entrepreneurship at Worcester Polytechnic Institute, and Distinguished Visiting Professor at University of California, Irvine. Dr. Burt was born in Asuncion, Paraguay in 1957 where he resides with his family.