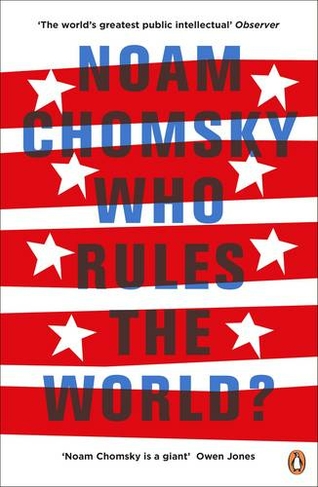 Who Rules the World?

By Noam Chomsky (Author)
Paperback
https://www.whsmith.co.uk/products/who-rules-the-world/noam-chomsky/paperback/9780241189450-12-000.html £8.19 rrp £9.99 Save £1.80 (18%)
GBP
Availability
In Stock
Free Delivery Available When You Spend £15 Or More
Details
Spend £15 On Eligible Products To Recieve Free Standard Delivery To You Home Or Free Next Working Day Click And Collect To Store
Share

Who Rules the World is the essential account of geopolitics right now - including an afterword on President Donald Trump Noam Chomsky: philosopher, political writer, fearless activist. No one has done more to question the hidden actors who govern our lives, calling the powers that be to account. Here he presents Who Rules the World?, his definitive account of those powers, how they work, and why we should be questioning them. From the dark history of the US and Cuba to China's global rise, from torture memos to sanctions on Iran, this book investigates the defining issues of our times and exposes the hypocrisy at the heart of America's policies and actions. The world's political and financial elite are now operating almost totally unconstrained by the so-called democratic structure. With climate change and nuclear proliferation threatening our very survival, dissenting voices have never been more necessary. Fiercely outspoken and rigorously argued, Who Rules the World? is an indispensable guide to how things really are.

Noam Chomsky is the bestselling author of over 100 influential political books, including Hegemony or Survival, Imperial Ambitions, Failed States, Interventions, What We Say Goes, Hopes and Prospects, Making the Future, On Anarchism, Masters of Mankind and Who Rules the World. He has also been the subject of numerous books of biography and interviews and has collaborated with journalists on books such as Perilous Power, Gaza in Crisis, and On Palestine.Noam Chomsky is Institute Professor (emeritus) in the Department of Linguistics and Philosophy at the Massachusetts Institute of Technology and Laureate Professor of Linguistics and Agnese Nelms Haury Chair in the Program in Environment and Social Justice at the University of Arizona.